On Day Five, John Lackey made me happy. I worry about John Lackey. At 38, he's one of the (if not the) oldest Cubs on the roster. Last year he was key to our magic 2016 run to the World Championship. This year, he's struggling.

There have been whispers that he's passed it. He's old. He can't go deep anymore. He should be sent to the bullpen or DFA (designated for assignment).

There's an unseemly glee to all the buzz. Yes, Lackey is prickly. He snarls at umpires, at batters, his teammates and even birds if they get in his way when he's pitching. Other players seem to accept this as "John being John." But fans and reporters haven't embraced him.

Oh yeah, and on a team with four or five matinee idols, Lackey stands out as being scary looking. No car dealers or local restaurant chains have snapped Lackey up as their spokesman. I've never seen a kid wearing a Lackey jersey to the park. He's too intense and intimidating. I get that.

But all this makes me care about him more. If his manager and teammates stand by him, so do I. And today, he beat one of the best teams in the league, The Washington Nationals. It was his fourth straight win. OK, so he only went five innings. Whatever. He faced 22 batters and only gave up two earned runs and got a W next to his name.

If you want to play along, just come back here (meaning to this blog, not this individual post) each day in August, looking for the Happy Cub. Every day I will try to have a post with the headline: August Happiness Challenge: Day [X]. Leave a comment and then post your own daily happiness, with August Happiness Challenge in the title to make it easy to find.
Posted by The Gal Herself at 8/05/2017 06:01:00 PM No comments:

... because Nonnie recommended the Beach Boys
Unfamiliar with this week's tune? Hear it here.

1) In the video for this song, the Beach Boys dive into the pool with all their clothes on. Have you ever ended up in the water while fully clothed? If yes, were you pushed? The nearest thing I can recall is when I was in high school. A group of us had an autumn sleepover, and even though it was too cold to use the pool, her friend's parents hadn't drained it yet. Post-midnight/pre-dawn, we all jumped in, wearing nothing but our nighties. Yikes! I can still remember how cold, gross and green the water was. Couldn't wait to dry off, peel off that nightie and slide into that nice, warm sleeping bag.

2) In this song, Mike Love sings he wishes "every kiss could be neverending." Where did you receive your first kiss? Was it wonderful, or awkward? Awkward. It was beside a local hamburger stand. I happened to run into a friend's older brother -- a college student! -- who was home for the summer and was surprised by how I'd changed since he last saw me. I'd always been crazy about him, so this was literally a dream come true. But I still had braces, which worried me immensely. The college girls he was used to didn't have braces. The next summer, I lost the braces ... and then I lost my virginity in the backseat of his car, parked just blocks from the burger stand, and we went on to date for three years. I just Googled him and discovered he's head administrator at a hospital in North Carolina. Our mothers were lifelong friends, so I got frequent updates on him and last I heard, he worked for a hospital in Ohio. So he got a promotion. Good for him! He was a nice man, we were just so young.

3) Brian Wilson was the creative force behind the Beach Boys. It's possible that the group's legendary and unique sound came from an incident of bad parenting. Brian's father hit him so hard with a wooden plank that he is deaf in his right ear. Which of your senses is sharpest -- sight, hearing, smell or taste? I suppose taste. I mean, I wear contacts and I've been listening to rock through headphones for 30 years, so it can't be my sight or hearing. Maybe smell? Probably taste.

4) Brian's brother Dennis was the cutest member of the group, and also the only one who could surf. Have you been to the beach yet this summer? Nope. Could have gone to the beach with my niece when I visited her in Michigan last week. She lives in a community fueled by tourists, who stay in cottages and summer homes along The Lake. But instead, we spent our time wandering through the quaint shops. Both she and I burn so easily, it seemed like a safer choice.

5) Dennis was also the Beach Boys' most colorful member. In 1968, he struck up an unfortunate and dangerous friendship with Charles Manson. Is there anyone in your life that you worry has bad taste in friends/lovers? I worry about my niece. She needs to be in love, and that leaves her vulnerable to unsavory characters. Her first boyfriend, while she was still in college, was underwhelming -- kind of a slug who was happy letting her support him. She went from him directly to her next boyfriend, who was very ambitious but also a pretentious asshole. I was saddened but not surprised when he cheated on her with an ex. This new guy, though! I like him! He's affectionate with her, he is politically progressive and has won over her cat, Annabelle. I hope they stay happy, at least for a while.

6) Lead singer Mike Love is the grumpiest Beach Boy. He refuses to perform if the concert promotional materials refer to the group or their songs as "oldies." Does it bother you to hear the songs, TV shows and movies of your youth described as "classics" or "oldies?" No. But sometimes the passage of time makes me sad. I was watching a "Dick Van Dyke" rerun that revolved around a British playboy (Richard Dawson) who had designs on Rob Petrie's wife, Laura. It occurred to me that just about everyone who was making me laugh is now dead. (Please stay healthy, Dick Van Dyke!)


8) In 1966, the year this song was popular, the Miranda Warning became law. Without looking it up, can you recite any of the Miranda Warning? "You have the right to remain silent. Anything you say can and will be held against you in a court of law. You have the right to an attorney. If you cannot afford an attorney, one will be provided for you. Do you understand these rights?" All those seasons of "Law & Order" taught me a thing or two!

9) Random question: The local college is pleading for models of all ages and sizes to pose for the life drawing class. Would you help the kids by volunteering to pose in the nude? No. It wouldn't be nice to scar those young people for life.


On Day Four, I enjoyed everyday artwork. I walk along the el tracks every workday, and often over the weekends. This form of public transportation makes my life easier and helps my community thrive. On the other hand, it can be dirty and ugly.

The village has done wonders to prettify the el tracks. Local artists submit sketches, the paint is provided by a local store, and we get to enjoy the view. Here's just a sample of the artwork I pass every day. Today, I stopped to appreciate it. 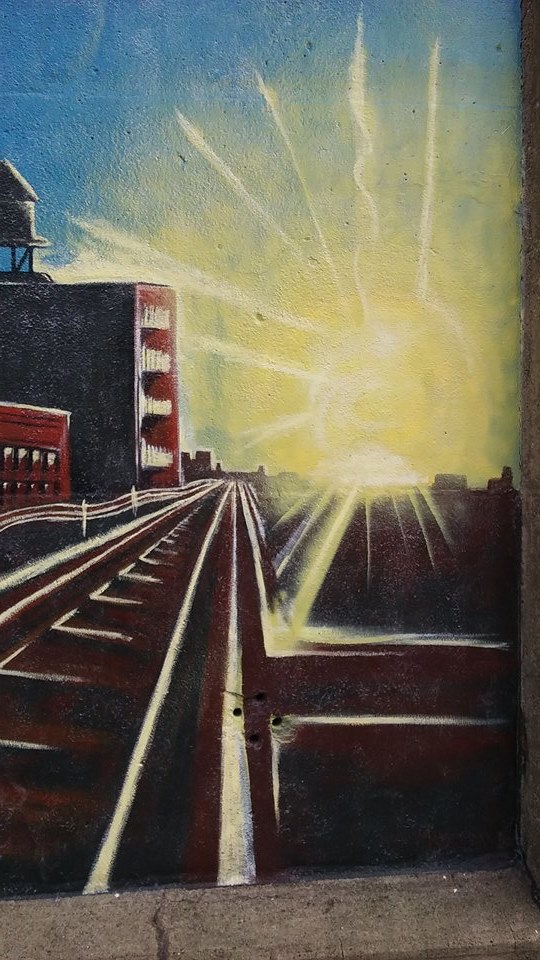 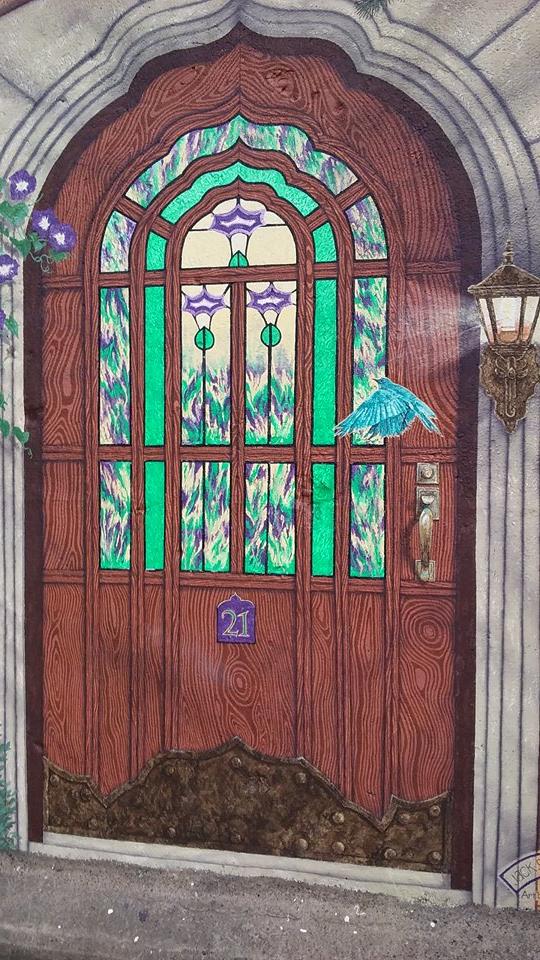 If you want to play along, just come back here (meaning to this blog, not this individual post) each day in August, looking for the Happy Cub. Every day I will try to have a post with the headline: August Happiness Challenge: Day [X]. Leave a comment and then post your own daily happiness, with August Happiness Challenge in the title to make it easy to find.
Posted by The Gal Herself at 8/05/2017 12:15:00 AM No comments:

What I left out

When I recounted this week's emotionally-charged conversation with my friend, Barb, I didn't include these two aspects. Composing the post was tiring, and in my attempt to get as much down as I could, as quickly as I could, I chose to save these for later.

1) Her terrier, Lucy, was once John's girl. When she and John first began dating, he dozed off on her sofa and puppy Lucy awakened him by licking his bald head. He found this delightful, and his warm and loving response to her dog helped assure Barb he was "The One."

Since John has been away so much, hospitalized so often, and has lost so much weight, Lucy is now afraid of him. He looks different, he smells like medicine, and he doesn't take her outside anymore. For me, that was the saddest story she related. I'm sure John feels bad about this, and I'm sure Lucy is lonely and confused.

2) Her first counselor was, literally, a joke. Barb is under so much pressure, is so sad, is so overwhelmed that her own health has begun to suffer. So her doctor recommended a shrink. Fresh out of school and young enough to be Barb's daughter, this PhD just stared with wide eyes as Barb recounted all her troubles -- financial, emotional, physical. Then she recommended an app. "How millennial," Barb laughed. My friend really does need help to get through these next difficult months/years, so I'm happy to report she now has sessions with a new, more mature and actual shrink, not a virtual one.