This year the TCM Classic Film Festival is online again. I am so glad that the my big presentation was over Friday afternoon so I can enjoy it without work stress hanging over me.

Now I’m trying to juggle movie watching with baseball (Cubs! 5 in a row!) and catching up on my sleep. So I’m taking advantage of the virtual format and DVR-ing what I can and concentrating on watching the content that may disappear after tomorrow.

FRIDAY: I saw an interview to Ali McGraw. Now 82 years old, retired and living in New Mexico, she looks back on a career that included three of the biggest films of the 1970s: Goodbye Columbus, Love Story and The Getaway. She is refreshingly honest about her acting ability and her career choices. She wasn’t a very good actress, just a lucky one, and she took the best of what she was offered. When her luck ran out, she transitioned to TV. Then she quit altogether and left acting behind, and eventually found peace. I found I liked her more than I expected to. 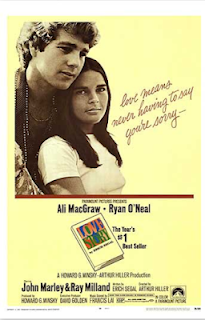 Then, of course, I rewatched Love Story. It’s corny. Ali McGraw really isn’t very good. Ryan O’Neal is better than I remember. His scenes at the end, first with John Marley (Jenny’s dad) and Ray Milland (his own father) just broke my heart. Maybe it’s because it’s Mother’s Day weekend, but now I think the love story isn’t the romance but the unbreakable bond between parent and child.

DVR’d and saved for later: Plan 9 from Outer Space. I’ve always heard it was the worst movie ever made, and one of the (unintentionally) funniest. I look forward to judging for myself

SATURDAY: Saw an interview with Rob Reiner (Misery) and a look at Howard Hawks’ approach to dialog-driven screwball comedy. I should have followed with Misery, or maybe a Hawks classic like Bringing Up Baby. But I went in a totally different direction.

The Mortal Storm (1940) is a new-to-me, not often seen movie about intolerance. About how Germans chose a man, Adolph Hitler, over an ideology. One of the characters is a professor who is ostracized because his scientific research didn't serve Hitler's narrative. Naturally, after having lived through the violence of January 6, after listening to the anti-mask/anti-vax propaganda, after watching Republicans chastise conservatives like Sen. Romney and Rep. Cheney for choosing truth and principle over loyalty to Donald Trump, this movie is especially chilling. It was powerful, but I didn’t enjoy it. I couldn’t enjoy it because it was too painful 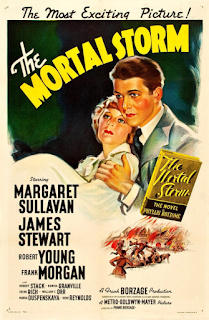 I love James Stewart. Like his contemporary Henry Fonda, like Tom Hanks today, he is exemplary at presenting conscience and integrity. Margaret Sullavan is luminous. She is an actress whose work and life I’m just becoming familiar with. There's a thrilling chase through the Alps. The special effects are pretty remedial, but it's engrossing because it's literally a matter of life and death.

DVR’d and saved for later: They Won’t Believe Me, a 1947 noir being presented with restored footage and tours de force by a pair of songbirds: Judy Garland in A Star Is Born and Diana Ross in Lady Sings the Blues.