Time for some self-revelation

I must credit my source: Kwizgiver

• I have a serious attitude problem
• I hate repetitive surveys
• I dig 80s music
• I’m feeling pretty lonely right now
• Donnie Darko is really overrated
• I have a shell necklace
• Cats are my favorite animal
• I wish I was with my boyfriend right now
• My mother had me when she was too young
• I haven’t brushed my teeth yet today
• I love lollipops
• I hate chewing gum
• I once ate takeaway food three nights in a row
• Will Ferrell is hilarious
• I don’t think hats suit me
• I wear alicebands
• I have heard of the band Tears For Fears
• I don’t drive & I’m not sure if I ever will
• I’d rather be driven than drive myself
• My job consists of sitting around on my ass all day
• Oh no, the sun is out
• I miss last summer
• The good memories of my past make me want to cry
• I HATE Star Wars
• Angelina Jolie was a great actress in Girl, Interrupted
• I know where Shakespeare was born in England
• I’m not interested in Shakespeare or any of his plays
• The term “whatever” is used when the person doesn’t have anything better to say
• Zebra print is so effing tacky
• If I were to get fat, I wouldn’t care
• Girls who look anorexic, now that is repulsive
• If you were to give me $200 right now, I’d go right out & spend it all
• I want to go to Madame Tussaud’s wax museum
• I don’t know much about my country’s history
• I do not own a bikini
• I wear earrings everyday
• I had a very disturbing dream last night
• I can’t watch animals eating other animals on wildlife TV; it makes me so sad
• I love to read True Crime
• I would find it hilariously funny if Former President Bush tripped over his own two feet & fell off a cliff
• I live in America & do not have an American accent
• I can fake a Scottish accent
• Some music moves me to tears (most movies do)
• I have read the book Jane Eyre
• I love Borders bookstore
• I’d love to work there
• I HAVE worked there
• I have never purchased anything from Starbucks
• I can sing opera
• I have seen a picture of my parents on their wedding day
• My parents never married
• Sometimes I wonder if I was adopted
• I strongly believe in reincarnation
• The celebrity I’d most love to meet is dead
• I find Joaquin Phoenix highly sexilicious
• I call people “fools” a lot
• People in motorized wheelchairs make me laugh
• I have been caught singing into my hairbrush
• When I’m embarrassed I turn bright red
• I don’t blush
• I’m not squeamish at the sight of blood
• Guys who smell good really turn me on
• One of my favorite actors is Jim Carrey
• Kate Winslet is the perfect example of an English Rose
• I seriously think Sarah Jessica Parker is one of the ugliest female actresses out there
• I enjoy taking walks by myself in the summer
• One of my pets recently died
• I want to marry a fat old man with loads of cash
• I’m afraid of all animals with hooves
• MOO
• I’m interested in the supernatural
• My mother is such a gossip
Posted by The Gal Herself at 1/20/2010 03:27:00 PM 3 comments: Links to this post

Robert B. Parker has died, and I have lost a friend.

He was the author of the best-selling Spenser books, as well as the Jesse Stone and Sunny Randall mysteries. He was presumed to be in good health, which is why his death (at his desk) was such a shock.

Of the 37 published Spenser books, I have read 34. Of the remaining 3, one is in my TBR pile waiting for me, one is a "young adult" novel, and one is called The Widening Gyre, a 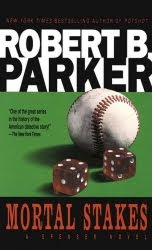 nd the title annoys me. I believe that Spenser would approve of my reason for passing on The Widening Gyre, because, like me, he was a flippant smart ass who was unable to keep his opinions to himself.

Mortal Stakes is not only my favorite Parker/Spenser books, it's one of my favorite books of all time, any genre. More than "just" a mystery, it's about imperfect love, loyalty, and baseball -- three of the most interesting topics I can imagine.

I understood Spenser because:

• He loved Fenway and would rather listen to the Red Sox than watch them.

• He thought he lived in the best city in the world, Boston, "The Athens of America."

• He loved the often-annoying Susan Silverman more than his next breath, but wanted neither to live with nor marry her.

• He believed monogamous sex could be sexy.

• He loved and trusted his best friend, Hawk.

And, because he was my friend, I got annoyed with Spenser. He wasn't aging gracefully, and his attitude toward women was just sooooo frustrating! But while I acknowledged his flaws, I loved him all the same.

When Michael Jackson died, it seemed the world stopped. Oh, the shock! Oh, the heartache! That's why I'm pissed right now. For the last 10 years, I read every Spenser book as it came out and then went back and read the others. Robert Parker's output was more reliable, and had a greater impact on me, than Jacko's. (Prior to his death, Jackson hadn't had a hit album in the US since HIStory in 1995.)

That's why, on this blog, we demand a bit of respect for the journeyman/artist. The disciplined craftsman. An author who worked hard to keep us entertained and to stay true to the characters he created ... and I loved.

So while there won't be magazine covers or TV specials devoted to Robert B. Parker, I'm saluting him here. There's a dignity to working hard, facing the problems that life sends our way head on, and maintaining your integrity to the end. And dying at your desk ... writing.

Scott Brown is a dish 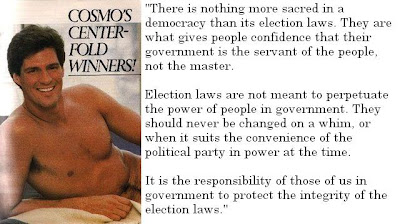 It's appalling to me that Ted Kennedy's Senate seat, once held by his brother and a Democratic stronghold since before I was born, has gone Republican. Especially now, when healthcare is on the line.

Scott Brown is, however, now the first US Senator I've seen naked. And it's been my distinct pleasure.

I am enjoying Clerks II. It's not a movie I'd seek out, but here it is (as Sinatra would say) in the wee small hours of the morning, and it's on cable and I'm into it. Yes, it's unremittingly vulgar, but its heart is pure.

But every commercial that Comedy Central runs is for Girls Gone Wild. Clearly I'm not a prude, or wouldn't be watching this movie. But unlike the Kevin Smith movie, Girls Gone Wild has no heart. It's exploitation and it creeps me out.

I realize that 50-something women are not demographic Comedy Central expected when scheduling Clerks II, but still. Like the movie, I may be unremittingly vulgar, but my heart is pure, too, and Girls Gone Wild is just ugly.
Posted by The Gal Herself at 1/20/2010 03:30:00 AM 2 comments: Links to this post

Cafeteria lunch with my least-favorite coworker at 12:30. 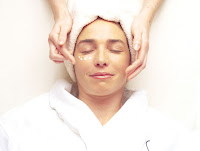 Back in the cafeteria at 2:30, where I return phone calls and avoid any further contact with my least-favorite coworker for the day.

At Arby's at 4:45. No offense to the Amtrak cafe car, but Arby's is better and more reliable.

Rum and Coke from the Amtrak cafe car at 7:30. No offense to Arby's, but it had a greater impact than the small Dr. Pepper.