1) Eddie Fisher starred in a popular 1950s TV show, which was sponsored by Coca Cola. Do you have a favorite soft drink?  That would be Coke. 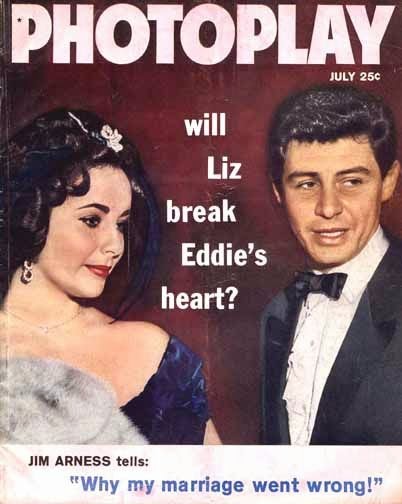 2) He was notorious for leaving his famous first wife for his very famous second wife. Can you name either of the women involved in this Hollywood scandal? He left Debbie Reynolds for Liz Taylor. Who left him for Richard Burton.

3) His oldest daughter, Carrie Fisher, is best known as Princess Leia from Star Wars. Are you a sci-fi fan?  No.

4) Since Sam's father is particular about his footwear and likes "a good pair of Cole Haan loafers," her Father's Day present to him is a DSW gift card. If we were to give you a gift card to any store or restaurant, which would you choose?  CVS. There's always something I can use from CVS.

5) Sam's father hates it when she swears. When is the last time your cursed? I have a potty mouth, so undoubtedly it was yesterday.

6) Sam's father is a voracious reader. So much so that the local librarian knows him on sight and by name. How often do you visit your neighborhood library?
Not often enough. There's a big, beautiful library two blocks away and I should use it more.
7) "A good used car is a better investment than a new car." That's what Sam's dad tells her when she's in the market for wheels. Share some other words of financial wisdom with us.  Pay attention to ATM fees! The average person wastes more than $150/year on those fees. If you can't find an in-network ATM, then go to Walgreen's or CVS, pick up something you need anyway and get cash back.

9) To celebrate Father's Day, Sam is giving away her father's favorite candy: LifeSavers. Would you prefer a roll of Wild Cherry, Butter Rum, Winter Green or Peppermint?   Mints, please. 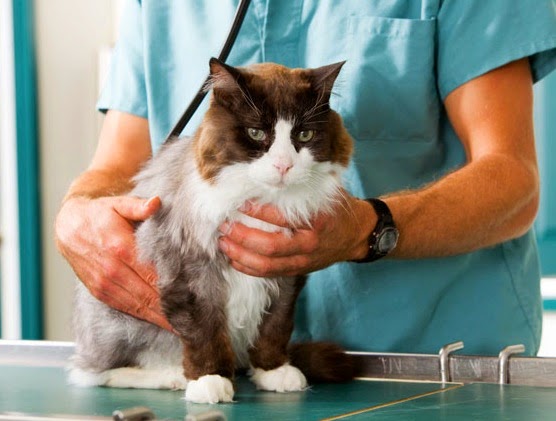 And yet this afternoon, at almost exactly 1:45, Joey was panting. I kept careful track of the time because we had a vet appointment at 4:00 and I wanted to be able to report everything to him.

But, like Charlotte, he's 17 or 18 years old. He enjoys sleeping and cuddling and napping and purring, but that's it. He doesn't run or play much anymore. If he was a person, he'd be between 85 and 90.

He hates going to the vet. It terrifies him (though it's the trip, not the vet visit itself that upsets him; for poor Charlotte, the whole episode was always terror). Getting a shot, having his glands expressed, riding to and from in a cab, it all exhausted my poor boy.

So I'm waiting until August to consider his dental work. If he's still feeling good, if he's still strong enough for anesthetic, we'll get those gums taken care of. But I don't want to turn around and drag him to the vet again next week. It doesn't feel fair.

Joey is a good boy. A dear, sweet old tub of guts. He's earned the right to be comfortable and happy. I'm trying to do right by him.

"Leave no comrade behind"

As I was headed home on a late train Wednesday night, I couldn't help but notice the three guys in the car's vestibule. Late teens. Not talking, but clearly together. Two could not have been standing closer, the one in the rear had his arm around the neck of his friend. I just assumed they were lovers -- a little drunk to be this public in their affection, but what the hell.

Then the one in the front started retching. Oh, but he was drunk! And the other two were so protective of their boozed up buddy. Since one of the kids was wearing a camouflage hat, they reminded me of partytime comrades in arms.

They got off in my town and I kept an eye on this grave trio for a couple of blocks. I was confident they were OK. Wednesday night. My prediction about their condition Thursday morning is not as rosy. 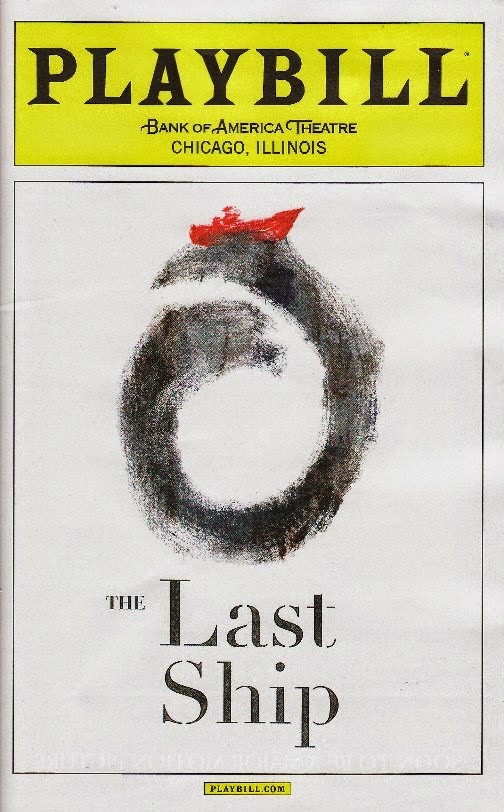 Wednesday I saw The Last Ship, enjoying its world premiere here in Chicago. It's definitely still a work in progress -- a little too long, a little too slow, a few staging problems --  but it's moving. A small town is about to lose the shipyard, the business that employed almost all the village's men. A man returns to the town after more than a decade at sea, and finds everything in a state of flux. It's not a fun show, nor an exciting show, but it's emotionally resonant. And the score is high quality pop, just what you'd expect from the composer, Sting.

Even more exciting than the play, I nearly ran into Sting, literally, early Wednesday evening. I was headed over to Italian Village, across the street from the B of A Theater, to meet my friend Barb for a pre-play dinner and birthday celebration. Sting was turning from Monroe onto Michigan Avenue, taking a stroll before the evening's performance. He was wearing a tight t shirt and hoodie. He's very bald, very buff, and very handsome. More handsome than I expected. I'm proud to report I respected his privacy.