Drinks after work with John made me happy. He owed me money -- sort of -- and was eager to give it back right away. So we met after work and had a couple at a bar near my office.

It's a little place, tucked away inside the train station. It's dark and the music is eclectic and loud. Every time I've passed it I've thought to myself, "John would love this place." Tonight we finally got to lift a few at a table by the door and I'm happy to report that he did, indeed, love it.

It makes me happy, too, to know someone so long and so well. I really am lucky when it comes to my friends.

(Re: the money ... John and I are going to the Cubs-Giants game over Labor Day weekend and I'm the one who paid when ordered the tickets.)

Of Diana's Death and the Clinton Candidacy 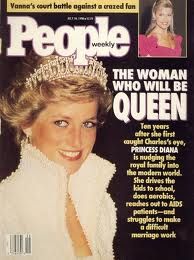 Princess Diana died because she got into the backseat of a car that was driven by a drunk. The Mercedes was turned into an accordion and photographed under cruel fluorescent lights in an ugly tunnel. It was tawdry. It was ugly. It was plebeian. This is not what is supposed to happen to princesses.

And so conspiracy theories cropped up and now, more than 20 years after her death, flourish. The Royal Family saw her as a threat and had her killed. The people who believe this will say if you don't see their evidence, you are blind. They have to cling the conspiracy, because the truth is unacceptable to them. It simply doesn't compute.

I'm finding the same attitude among Sanders supporters toward the nomination of Hillary Clinton. It became mathematically impossible for Sen. Sanders to win the nomination before Memorial Day, but for the more rabid, the math doesn't compute, the reality is unacceptable and as we race toward Labor Day they're still in denial.

I'm not talking about hurting. Of course true believers are still hurting. And as a Kerry 2004 supporter, I can promise them the pain won't ever completely go away.

I'm talking about getting past the rage. And the Facebook page I stumbled upon has shown that this rage can make a woman I assume is otherwise intelligent -- she says she's a lawyer -- sound like the Brit in a pub in Queens Road ranting about the MI5 assassination of Diana.

Oh, my Lord. For her, the Clinton/Sanders campaign outcome wasn't predictable because of 21st century demographics. No, that's too simple, too tawdry and forces her think about which side of the racial divide she's standing on. It's preferable to make this about THEM, the tyrannical corporate oligarchy.

•  THEY wanted Hillary because Sanders is the candidate THEY feared most. I agree Sanders is the candidate big business disliked most, but they never feared him. Because he was never going to win this nomination. Sen. Sanders never caught fire with POC. Maybe that was unfair, maybe his message should have resonated. But going forward, if Sanders supporters want to enhance the legitimacy of their candidate among African Americans, maybe they should have thought twice before booing Stephanie Rawlings-Blake, Elijah Cummings and Cory Booker on national TV during the DNC. The oligarchy had nothing to do with that tone-deaf display of privilege.

•  THEY wanted Trump. I believe in this case, THEY switches from just the oligarchs to now include a combination of the Republican and Democratic establishment, who chose (or allowed) Trump to win because he would be so easy for Hillary to beat. This conspiracy depends upon collaboration among the senior operatives of at least 18 national campaigns across two parties. Okie-dokee. That's not only naive, it's muddle-headed. Why would THEY want to damage every down ballot Republican in all 50 states, just to win the White House for Hillary? How did THEY get to be so rich and powerful without noticing it's the local and statewide governments that make most of the laws that decide how day-to-day business is conducted?

•  The way to stop THEM, long-term, is to vote third party. Yeah, that'll work. BTW, which party is the third party? Am I striking a blow for decency and showing my moral superiority by voting for Johnson or Stein?

... And in private, Queen Elizabeth exchanged her crown for a fedora, puffed on a fat Cohiba like Al Capone, and called for a hit on Princess Diana.

I don't mean to be too hard on this one benighted Facebook poster because she herself doesn't matter, she's merely a symptom. But one thing about this rabid Hillary hater really amused me:

She claims her "spirit animal" is Julia Sugarbaker from the late 80s/early 90s sitcom Designing Women. You remember firebrand, Julia. She was created by Linda Bloodworth-Thomason, a well-known Clinton confidante. During the 1992 season, the Julia character was a Clinton supporter and a 1993 episode revolved her attempt to attend Bill's inauguration. Yet the Clintonites have slyly co-opted a Sanders supporter! OH. MY. GOD. Look how deep the conspiracy goes!