Last week, my aunt chose to try to fight with me over, of all things, Princess Diana and Harry. This week, it's Joe Namath.

I'd just seen an ABC News piece about this iconic photo: Broadway Joe in Miami, his Super Bowl pre-game press conference held poolside in Miami. I recalled how it pissed people off, including my dad, because it supposedly showed Namath wasn't taking The Big Game seriously. But, I wrote, "he won the damn game. That aside I just now noticed he's wearing Burberry trunks. It's hard to believe now when he's harping at us to get all the benefits we DESERVE, but at one time, Joe Namath was the coolest guy in the universe." To me, it was about the passage of time. 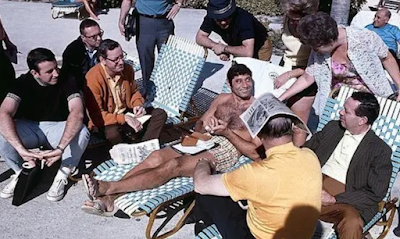 Nancy commented that must have been "the hairiest guy in the universe," and we wondered when manscaping became a thing. Amy posted that she loved the guy in the yellow shirt using a newspaper instead of sunscreen.

Then my aunt. Oh, my aunt! She went on about how he was never "cool" because of the pantyhose commercial and how she and my grandfather used to pronounce his name Na-moth (rhymes with moth).

OK, Auntie, just another thing I'm wrong about. Never mind that the pantyhose commercial* was in 1973 -- five years after the poolside press conference -- so it has nothing to do with the photo I posted. Never mind that making fun of someone's last name isn't even funny. (And I doubt my grandfather did that. My dad, certainly. But my grandpa didn't make fun of things like that because he was an immigrant and was sensitive to ethnicity.)

So I hide her comments to me and now I'm restricting her access to my posts. Facebook says that this will be invisible to her. I hope so. I don't want to alienate her.

Her oldest son and two of her adult grandchildren are already dealing with her less and less. They use the phrase "racist and homphobic" and "Trumpy" to describe her diatribes. She doesn't seem to get hat her grumpy old lady act is driving people she loves away. She mentioned to me in an email that she was hurt that she felt "ignored" at her granddaughter-in-law's Zoom baby shower.

How said is that? She is on the verge of becoming a great-grandmother for the first time. At 74, she is young enough to enjoy it. And yet her take-no-prisoners attitude is going to get in the way of that, because not everyone wants their baby exposed to outspoken racism or homophobia. I hope her scorched earth/MAGA strategy is worth it to her.

As for me, I was going to send her an email on Sunday but I was too pissed. I love her and honor our history and so I will write to her, but I have to calm down first.

She wasn't always like this. You know how on Facebook your "memories" pop up? Six years ago, I can see that I posted some pretty controversial things and she managed to resist responding with provocative comments. I think when Donald Trump came down that escalator and announced his candidacy, he began to coarsen us as a people, and it's going to take a while for us to heal.

*The pantyhose commercial is still a big deal in advertising because it was one of the first spots to joke about sex and gender as feminism was beginning to take hold and women were complaining about being objectified in print and on TV spot. It was considered risky at the time, but it's used as an example of "talk value." The press coverage the commercial got was worth more than the TV time the advertiser bought.