What I did today instead of laundry

I was awakened this morning at 4:00 AM. Not by Reynaldo, but by a stabbing pain in my right calf. The suddenness frightened me. It passed quickly (less than 2 minutes?) but it was sharp and new and upsetting. I drank some water, played a little Farmville, fed the cats (who thought this was the official start of our day), and went back to bed until about 7:30.

At 9:00 AM, as I was preparing to multitask by watching Meet the Press as I touched up my pedi, it happened again. Same pain, same spot. My face felt hot. I remembered what my doctor had told me about calf pain last fall -- that it could signal something dangerous and I shouldn't wait to get it "looked at." So I took a shower (standing on my right leg the whole time so I could see if it was weak; it wasn't) and went to Urgent Care.

Because the pain was on the outside of my calf, where there are a lot of ligaments but not many blood vessels, it was likely not life threatening. Plus, I just had an ultrasound in October which revealed no clot.

However, because I am over 60, and overweight, and my right calf is larger than my left (likely from edema), and October was 2 1/2 months ago, they couldn't completely rule out a blood clot.

So, the doctor said, he was giving me an order to go to the ER. He told me it was "precautionary." He said if a blood clot was ruled out, I should wear compression hose at night and see a sports doctor.

He seemed so sure it was nothing that I almost didn't go. Then the nurse came in with the paperwork. As almost an afterthought, she asked me about my holiday plans. I told her I was flying to Florida and she cut me off, saying, "Then it's good that you're getting this checked out."

She was right. So I walked up the street to the ER. It was a different world than Urgent Care! More cramped, more institutional gray, older. Everyone was very nice. It was a sunny Sunday afternoon before Christmas and the Bears were playing the Packers. Lots to chat about as the processed my paperwork, trying to keep me from being scared. I appreciated it.

They put me in Screening Area #2, where I was for hours. On a gurney, in a gown. With my book. A nurse came and checked on me frequently. A very nice doctor -- with a kindly manner and a white beard, just like in the movies! -- chatted and gave me a nebulizer treatment for my cough. ("Why not? You're waiting here anyway, right?")

Finally they were ready for me in Imaging. The sonographer was very nice -- also a little older than I expected, but it was Sunday and this was their Emergency staff -- and assured me she always kept  her "goo" at room temperature.

Then I was wheeled back to #2, where Friendly Dr. Freud came in and told me to go home. "I don't know what caused your pain, but it's not life threatening." And he gave me a script for an inhaler. He actually seemed more worried about my cough, which is a relief in the scheme of things.

On the way home, I picked up a slice of pizza. I was in bed by 6:00. Exhausted by the stress, but happy to be in my own bed.

I am grateful for insurance, so I can afford to rule out a blood clot. Today cost me a little over $200, which I'm not happy about, of course, but I realize the price tag without insurance would have been completely prohibitive and I would've been playing the odds with my life.

I am grateful that I have an Urgent Care almost literally across the street and a hospital 15 minutes away on foot. It's not the hospital my doctor practices at, or the one affiliated with the Urgent Care facility. Those are newer, more modern and frankly, more pleasing to the eye. But this one was nearby, they took me, and everyone was unfailingly gentle and sensitive.

And I'm worried about Frances. She was the little girl in Screening Area #1, and she was in Imaging next to me, too. Because of the curtain "walls," I never saw her, but I heard her. She sounded about 10 years old. She was very scared and, for some reason, no parent or family member was with her. From what I could tell she had some kind of urinary or bladder issue, and she was very scared. Very embarrassed that she had to be in a diaper. She never actually cried, but I could tell by the conversation that she was -- literally -- attached to the ER nurse. Finally the nurse agreed to go with her to Imaging, which I thought was very kind.

Now, if you'll excuse me, I'm going back to bed to watch Law & Order reruns and try to relax. It was an exhausting day, even with the positive outcome.


What season has your favorite looks? Fall, I suppose. I'm always happy to see my sweaters again, and I enjoy shopping for new ones.

Thrift store, boutique, or online? I have begun appreciating thrift stores more. A lot of it is the thrill of discovery. My greatest find was last spring, when I got a like-new black trench ($175 MSRP @ Nordstrom's) for $14! 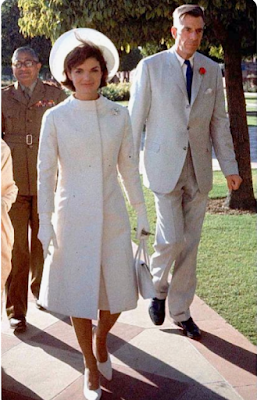 Do you like to accessorize? No. I think less is more.

What does your basic outfit look like? Jeans and a pullover. If it's a dressier occasion, I'll wear a t-shirt with a shrug in spring/summer or a jacket/cardigan in fall/winter.

What piece of clothing do you spend your money on the most? Winter coats or boots are the most expensive. I buy lots of sunglasses because I lose them.

Do you wear hats? Nope. Hoods or earmuffs, please.

What is your opinion on wearing socks and sandals together? I have a low opinion of this.

What colors do you like to wear? Blue, black and gray (which I guess is really just a muted black, isn't it?)

What are some of the strangest outfits you have seen? On the el, I've seen some interesting looks. I'm especially fascinated by overweight women wearing sexually suggestive t-shirts ("You wish you could handle these," "Give me something to scream about," etc.). I wonder where they're going that this is appropriate attire, and whether they really believe they're all that.

What fashions do you hate? "Hate" is a strong word, but I really don't get distressed jeans.

What are your favorite styles? I like tailored looks. If I still had the body I had when I was 25, I would love to wear Emma Stone's Oscar 2018 look. 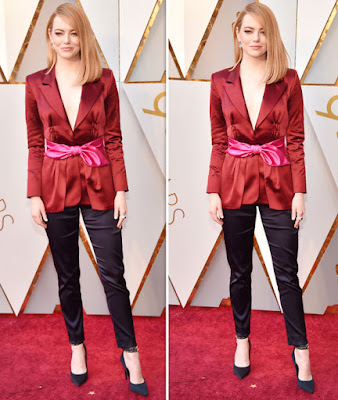 What do you think of body piercing? It's not for me.