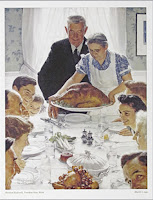 5. What has been your greatest challenge in life so far?  I don't like to think about it, but I suppose not thinking about it doesn't solve anything, either.

I suffered abuse as a child and teenager. Physical, sexual and verbal. From three different people. Two are dead. All were family. I'd be lying if I didn't admit that colors my attitude toward the sentimental depictions of holiday celebrations in pop culture.

At times, though, I am proud of what I learned. I walked away from the abusive relationship I landed in as a young woman. I understood how my upbringing had led me to believe that's what I'd been bred for, and I broke the pattern and walked away.

Today he's being mourned and revered. Yes, he was handsome and graceful and abundantly talented. Yes, he met the ravages an ugly affliction with a beautiful dignity.

But he wasn't always so beloved. I hear echoes of Ali's coverage when I was a little girl. In announcing the Champ's passing, 88-year-old Dodger announcer Vin Scully called him both "Muhammad Ali" and "Cassius Clay." He changed his name in 1964. While the rest of Scully's announcement was touching and respectful, it brought to mind other sportswriters (New York's Dick Young comes to mind) who insisted on referring to him as "Clay," as though the man's conversion to Islam was not sincere. Just a way to dodge the draft. Just more evidence that he was too brash, too black.

I look at this man and I see the story of my country's last 50 years. I'm proud of how far we've come -- a black man with an decidedly un-WASPy name is in White House -- and I'm grateful to the Champ for the role he played in leading us along.

The Greatest of All Time, indeed.