I Want this to not be happening!
One of my neighbors is an angry and odd old bird. He hates the condo association in general and some of us (including me) specifically. Because he didn't agree with a special assessment or something, he has gone on a wave of vandalism. So far this year, he has:

• Regularly shredded newspaper and left piles of it in the elevator, as though making a hamster bed

• Once urinated in the elevator, then made a paste by adding baby powder

• Stolen the inspection certification from the elevator, causing the condo association to have to pay a fine for not displaying it prominently

• Stolen lightbulbs from the lights on the back stairs

• Written on the washers and dryers in lipstick

• Slashed the screens in the back of the building

• Begun peeling away the wallpaper in common areas

Last night we had a condo owners' association meeting with a representative of the local police department to discuss how to handle the situation. A file has to be compiled, with dates and times, to construct "a pattern of abuse" of people and property so that he can be evicted, if not forced to sell.

He's a looney old bastard. He lost his license in 2001 -- he was a security guard but he had filed so many workman's comp complaints that the state deemed him suspicious and it wasn't renewed. He hasn't worked since. His wife left him in the 1990s. He has no friends, no family, no interests (beyond petty larceny and vandalism). The officer was reasonably sure that he could never be formally charged and tried for anything criminal, but that doesn't mean he can't be arrested and held overnight, if caught in the act.

I know this is odd to say about a man who mutters, "bitch" under his breath when I pass, but I feel bad for him. For when the inevitable eventually happens, where will he go? How will he live? 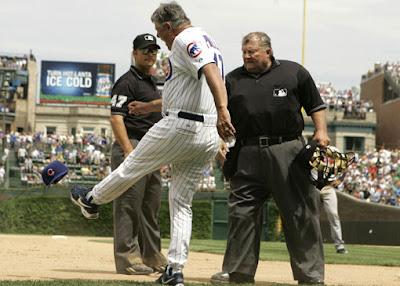 "Thanks for the memory … You may have been a headache, but you never were a bore. How lovely it was …"

Lou Piniella announced his retirement Tuesday and it leaves me so sad. I love Lou. He is the only Cub manager in more than 50 years to string together three consecutive winning seasons. He so spoiled us that fans are bitching and moaning, as if the 2010 season is the worst ever. (Yeah, right. Get over yourselves, you big babies. Cub fandom is about long-term perseverance, not short-term thrills.) Lou has been the saltiest, most exciting and charismatic skipper since that lion of my youth, Durocher.

The team came through for him with a wild one, coming from behind to beat the Astros 14-7.

Even better, my friend Kathleen was at the game. She texted me from The Friendly Confines. Wednesday is an important trip to the oncologist for her. Now this is also what Cub fandom is all about -- the comfort of tradition. Thanks to Sweet Lou and the boys for taking my friend out of herself for a few hours.
Posted by The Gal Herself at 7/21/2010 01:49:00 AM 4 comments: