Last night, during a genuinely dreadful game (Cubs lost their 10th straight), the Cubs broadcasters promoted an online auction for the Anthony Rizzo Family Foundation. More than $650,000 was raised to help families as they battle cancer.*

The top earner was a day of fishing in Fort Lauderdale with Anthony himself ($175,000). There was lots of autographed sports memorabilia, including a Michael Jordan basketball, Muhammad Ali boxing gloves, a Babe Ruth baseball. A local TV meteorologist made herself available for the day to school kids and raised $3,500.

This item especially intrigued me. First of all, the listing said it was donated by Andy Cohen personally. I wonder how Andy found out about the auction to make the donation. Secondly, I was surprised that there was much overlapping interest between Cub fans and Watch What Happens Live viewers. Last, I got a kick out of Andy's description of this item. 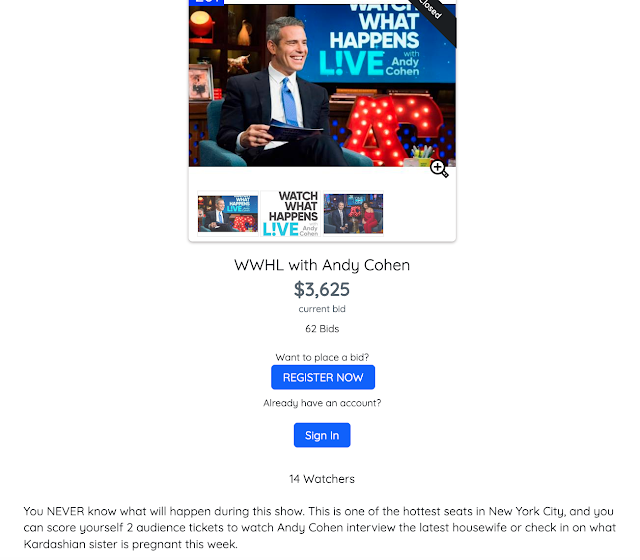 *One thing I learned from my favorite-most Cub is that hospital parking is expensive. It's not unusual for parents to have to pay $30/day to park where their child is a patient! Combine that with the cost of lost wages, eating in the hospital cafeteria, daycare if the family has other children, and parking is an added expense families can't afford. One thing the Rizz' foundation does is reimburse families for parking. One less thing to worry about as they battle cancer together as a family.