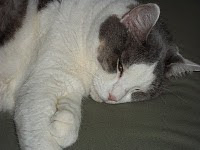 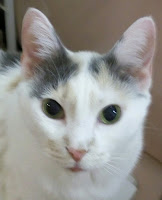 Do you tell your family you love them enough? I don't have that much family left to tell. I do regret not telling my late uncle how much he meant to me. I still think of him every day.

Have you ever used the word ‘lame’? EVER? I'm sure at some point in my life I've said it.

Are you/Were you in a band? If so, what was your band name? Never in a band.

When is the last time you went to the doctor? I had my mammogram on January 9. All clear. (Yea!)

Do you own any shirts with a peace symbol on it? No.

Would you ever go to Japan? I have no interest in going.

What was the last thing you went to Walmart for? It's been years because I don't really like shopping there. I bought the ceiling fan currently in my den at Walmart.

Ever gotten in a car accident? Yes. I was a terrible driver (which is why I don't drive). I scratched the car door in a parking lot. Too close to one of those signposts that tells you which section you're parking in.

Have you ever been in a choir? No. I sing even worse than I drive.

Do you like the color of your eyes? If not, what color would you want them? I have pretty green eyes.

When was the last time you went ice skating? Don't even recall.

Do you like to brush your teeth? I don't really think about it.

Have you ever had a surgery? I had a hysterectomy in 2011. Scary because it was a cancer scare that precipitated it. All clear there, too. (YEA!)

Do you look older or younger than you actually are? I'm told I look younger. (Yea!)

When is the next time you’ll be up on stage? I can't even imagine.

Where did you spend your last birthday? Las Vegas.

What is the last show that you watched a full episode of? I watched a rerun of The Big Valley Saturday morning. I have a weakness for TV westerns. TV cowboys are so good and true.

Do you know anyone who lives in Utah? No

Is there anything you need to work on doing soon? I have a couple loads of laundry calling my name

Do your feelings get hurt easily? Yes

Do you, or do you know someone who has taken karate lessons? I've been involved with two men who took martial arts very seriously.

Were you ever a boy or girl scout? I was a Girl Scout for years (Brownie, Junior and Cadet).

I love the Oscars. I love the trivia -- like the movie which has the most nominations but no wins.* I love the controversies -- whether it's Luise Rainer vs. Carole Lombard (Best Actress, 1937)** or Robert Redford vs. Martin Scorsese (Best Director, 1980)†. I love the awards show itself, with the dresses and the speeches and the bad musical numbers.

Most of all, I love the movies. Nominate a film and I'll be there, buying a ticket. I want to see as many as I can before the show so I can be an informed viewer.

That's why I'm so bummed that I really haven't liked two of this year's big Oscar movies. And I'm not even sure I know why.

The Big Short. It's uniformly well acted. (Especially nominee Christian Bale, who seems to be wonderful in everything I've seen him in.) Some moments are unexpectedly funny. (Selena Gomez' cameo.) And I couldn't wait for it to be over. I was bored out of my fucking mind.

Carol. I'm crazy about director Todd Haymes. His movies are beautiful and lush and lovingly made. The big emotions and drama in the lives of his women characters are uniformly handled with respect so they don't sink into camp. All that is true for Carol. Yet I was disappointed. Unlike his wonderful Far From Heaven, there wasn't a single character in this movie I understood, or even liked.

Thank God for Spotlight. It's the much-nominated film that didn't disappoint. Like The Big Short, I knew how this story was going to end. And yet I was still riveted. It had a real impact on me. My mind keeps going back to it. Those final visuals -- white type against a black screen representing literally millions of young victims of sexual abuse at the hands of priests -- still hit me like a punch to the gut. And there's the universal pain of disillusionment. These Boston Globe reporters were parochial school boys and a church-going girl. Doing the right thing hurt them. It's powerful stuff. (For some reason, though, this movie causes a brain fart and in conversation I refer to it as "Searchlight.")

* A tie between The Color Purple and The Turning Point

** Oscar got it wrong. Carole Lombard is divine in a classic and Luise Rainer is simply adequate in a forgettable movie

† Oscar got it right. Ordinary People resonates with me so much more than Raging Bull did.