My Cousin Rose is coming to Chicago around Memorial Day. For reasons I've explained before -- and won't again just now because they make me sad -- I don't want her to stay with me.

I feel immensely guilty about this. I know my cousin loves me. And, when I was a teenager, she was literally my salvation. Hearts as good as hers are very special and must be handled with care.

But after four hours with her, I can't wait to get away from her. She's that negative about everything, and that negativity upsets me so much. I can't have her for the weekend in my home.

So I lied. I told her my oldest friend from California is coming in (she's not) to deliver her daughter to her ex-husband for a summer visit, and to attend an old neighbor's anniversary party. Then I told her my friends from the Keys are also coming in (they aren't) for the first time since 2004 for a convention and are extending their stay so we can have a reunion.

I joked that I've never been as popular in my whole life as I'm going to be around Memorial Day 2015. I told Rose that I'd love to spend an afternoon or evening with her, that I look forward to it (I do). And if we're all flexible and patient, I'm sure I'll be able to spend the time with her she and I deserve as well as with everyone else who will be in Chicagoland that weekend.

I feel sick about lying to her. I do. But I'd have an ulcer if I was dreading her visit for more than a month.

And so I did it. I chose to protect my stomach lining and protect her feelings at the same time.

These are a few of my favorite things

If you have a Carson's (or Yonkers or Boston Store) nearby, you should head on over before the 28th. Every article of clothing/home fashions you donate gets you a coupon for 15%-25% off almost anything in the store. (Even cosmetics/skincare/fragrances, which are seldom part of coupon promotions.) The store turns all your cast offs over to the local Goodwill for resale.

I love this sale because 1) it forces me to part with shit and 2) it alleviates guilt when I indulge in a little retail therapy and 3) it helps someone get a job. Goodwill does good work, and it does it well. 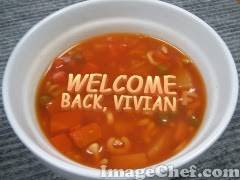 I missed you. Glad you're back in my comments!