1) In this song, Jimmy briefly attempts a healthier diet, which included sunflower seeds, carrot juice, zucchini and bulgur wheat. Do you pay attention to your daily consumption of vitamins, minerals, dietary fiber, etc.? I have a history of gut trouble, so I do try to make more fiber-wise choices. I should drink more water, and those fiber tablets aren't helping me sitting on my kitchen counter, are they?

2) Jimmy sings that he'd like french fries with his burger. Do you prefer to dip your fries or drizzle the ketchup over them? I dip.
3) Which cheese would make yours a cheeseburger in paradise: American, cheddar, Swiss, bleu, Muenster, or Monterrey Jack? I like the visual of yellow cheese on my burger, so I'll have cheddar or American, please.
4) Buffett fans call themselves Parrotheads. Concert attire for a well-dressed Parrothead often includes a Hawaiian shirt and a foam fin hat. What will you be wearing tonight? I'm doing this Friday night, but I can predict what I'll be wearing Saturday night: Jeans and a t-shirt. I'll go out on a limb and say that's what I'll be wearing Sunday night, too!
5) For someone with such an easygoing and laidback vibe, Jimmy is a very busy man. His business ventures include liquors, restaurants and hotels. He's also published eight books. All this in addition to making music! On a scale of 1 to 10 -- with 1 being lazy and 10 being highly motivated -- how would you rate yourself this morning? 1. I'm a slug. 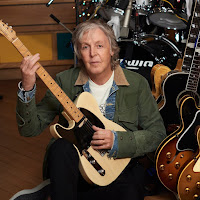 6) Jimmy has some very famous fans. Paul McCartney asked him to play at one of his parties, and Barack Obama invited him to perform at a fundraiser. If you could invite anyone -- anyone at all! -- to play at your party, who would you ask? Sir Paul would be nice, certainly. Strumming and singing and telling stories. Sigh. That would be a dream come true for me.

7) Jimmy was born on Christmas Day. Does your birthday fall on a major holiday? If yes, do you mind "sharing" your special day? My birthday often falls on Thanksgiving. When I was a kid and through my 20s, I hated it. But now it just seems convenient.

8) In 1978, the year this song was popular, the Susan B. Anthony Dollar was first minted. The initial design was not a hit with the public because vending machines could not accept it. What's the last thing you bought from a vending machine? I don't know if this counts, but I am forever shoving quarters into the coin slots in our shared washers and dryers.

9) Random question -- If today's your birthday, your zodiac sign is Libra. When did you last check your horoscope? I used to check it every morning on the train as I read the paper while riding the rails to work. But since I've been working from home, I haven't been reading the printed paper, so it's been over a year.

People can surprise you

... at least when it comes to cats. The reactions to the passing of Reynaldo have surprised me. For good and for bad. Let's start with the good.

I've gotten sympathy cards, which in and of itself isn't surprising. One from the ER vet, another from my vet and his staff. But then it got surprising.

Snarkypants sent a card and shared that she made a contribution to her local animal shelter in Reynaldo's memory. Now that was special! For I have been thinking a lot about how Rey and I got together. Someone tossed that little beige kitten aside like a dirty kleenex and he ended up at the shelter. Yes, he was an extraordinary behavior problem at times, but that's only because he had an extraordinary motor inside him. It occurs to me that whoever let him go missed out on so much -- so much spirit, so much personality, so much love. I'm grateful to Snarkela that she (and Rey) have now helped another cat find the home he deserves.

My cousin Rose sent a card, too. Not a big deal, in that I know she loves me and she hates when I hurt. But Rose can be crusty and she's not a pet person. So I was surprised and touched by how she addressed it. The envelope had both my name and Connie's. Inside she mentioned a Facebook post where I showed how reluctant Connie was to take over Reynaldo's perch on the kitty condo. She said she realized that Connie missed him, too. It was very sensitive of her.

Then there's my friend John. He hates animals. Probably cats more than dogs, but he's pretty equal opportunity. The fur and drool and pooper scoopers and litter boxes horrify him. In his apartment building, if the elevator doors open and he sees a dog in the car, he'll let it pass and wait for the next one, rather than share the space with the leashed creature. So when he began leaving me messages after Rey died, I responded with a text thanking him for reaching out. I didn't want to actually talk to him. I was afraid he wouldn't get it and ask me something offensive, like, "how much does it cost to off a cat?"

I couldn't have been more wrong. He insisted on talking to me, and said that he was sorry because he knows "how much you loved that cat. I was glad you had him for company when you had covid." That bowled me over for a couple reasons. First, like Rose, he was responding not out of empathy but because he cares about me. Second, we spend so much time concentrating on his health problems that I forget the impact my battle with covid had on him. John loves me as much as I love him. I just forget that at times.

Now for the bad. I find it hard to say Reynaldo's name, so I don't like to actually talk about it. Consequently, I specifically requested the two coworkers who know why I took the day off last week -- my boss and my art director -- not tell anyone what happened. Everyone at work knew Rey (he was famous for crashing Zoom meetings), and I just can't listen to condolences without crying and I refuse to cry in front of coworkers. So again, I specifically said, "please don't share this with anyone." My boss was good as his word. My art director?

There was an afterwork party last night. Held outdoors to celebrate the announcement that the office will reopen on November 1. For reasons tied to public transportation, I couldn't make it in time. My art director did go. She called me this morning to give me the gossipy lowdown. Mostly we talked about how happy people were to see her looking so good. She deserved all those accolades. She has handled her battle with cancer with courage and grace. Also, my art director can be a little competitive, and I was happy she could bask in the well-deserved attention and enjoy it solo.

But then she started talking to Mary. Mary is new to our agency and is in charge of creative resourcing. We're creatives, so she will be influential in our work lives. Mary and I Zoomed a few times and found we had important things in common: cats and the Cubs. My art director has no interest in either of those things. So, floundering for something to say, my art director told Mary I wasn't at the party because my cat died. "But," she said, "I told Mary he'd lived a full life."

First of all, I didn't miss the party because of Reynaldo. It had to do with the train schedule. Secondly, I specifically and clearly requested she not tell anyone about Reynaldo. How could, "please don't share this with anyone" be misunderstood?

I was upset, but then I told myself not to be too hard on her. After all, my art director did bravely handle her cancer battle and no one is perfect.

Then I logged into my work email and there was a message from Mary, offering her condolences on the loss of my "beloved orange tomcat." Rey had crashed Mary's and my Zoom meetings, and it was nice of her to remember him.

Now I'm upset again. This is my hurt. To share or not share. It's shouldn't be reduced to a conversation gambit over wine and prosciutto.

Congratulations to Anthony Rizzo! My favorite most Cub (now a Yankee) hit a landmark home run last night in Toronto. It's been a long time coming. He hadn't had a home run in three weeks, to the day. 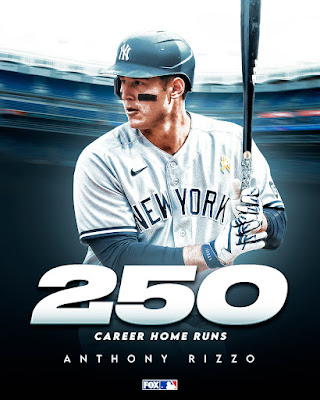