Reflections on my little madman on his 11th birthday 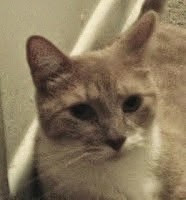 1) I adopted Reynaldo from an animal shelter in November 2004. He was estimated to be about 7 or 8 months old at the time, which means he was probably born in April 2004.

2) The shelter volunteers called him Houdini because he had rather deftly figured out how to get out of his cage. I should have known then what I was getting into.

3) During our first meeting, he leaped out of my arms and attached himself to the side of the cage that held the rabbits also up for adoption. I should have known then what I was getting into.

4) I renamed him Reynaldo Curtis, after my then #1 TV boyfriend, the detective Benjamin Bratt played on Law and Order.

5) He answers to "Rey," "Rey-Rey" and "Reynaldo." For all the faults I'm about to list, it must be said that he reliably responds when called.

6) Rey has an astonishing need for my attention that has not abated with time. The vet says he is "unusually attached" to me.

7) This manifests itself by waking me up at all hours of the night, just to get me to interact with him. He eats my hair, cries at the ceiling, or knocks things off my dresser one-by-one until I awaken.

8) He hates it when I'm on the computer or on the phone -- or basically doing anything that doesn't directly involve him. To distract me, he likes to knock things off the dining room table or living room end table. He does this even though he knows it will get him banished to solitary confinement behind the bedroom door. He can't help himself, he's compelled.

9) In his quest to capture and hold my attention he has been quite destructive. He's destroyed picture frames and ripped the curtain rods out of the wall (resulting in plasterwork and repainting). He also did an impromptu dance on my electric stove, turning on one of the burners, which was scary. That's why the stove's control panel is now gusseted in bubble wrap. It gives the appliance an unusual look, but it's better than letting him burn the building down.

10) He has a box of balls and catnip toys at his disposal, and yet he finds it more intriguing to torment me.

11) His liveliness makes him a good playmate for Connie, my two year old cat. Though they used to be boxing buddies, my 20-year-old tomcat Joey now finds Rey's tomfoolerly increasingly tiresome. 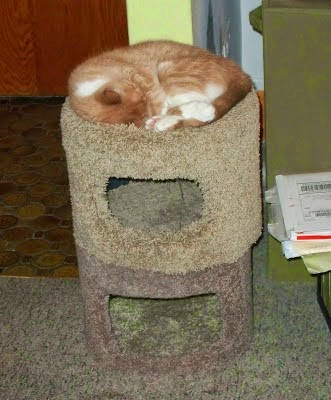 12) Rey has no temper. None whatsoever. I can clip his nails or shove pills down his gullet and he's fine with it. A neighbor kid once lifted Reynaldo up by his tail -- which had to hurt -- and he was very patient about it.

13) When he's a good boy, curled up upon his kitty condo, I realize he's adorable and well worth all the trouble.