Thirteen posts from years gone by. I've been posting a long time, and I'm taking this opportunity to look back on my February 17 musings through the years.

1) 2021: WWW.WEDNESDAY. A year ago I was reading an Agatha Christie book. Much as I enjoyed it at the time, I honestly don't remember much about it a year later. (Except for the interlude on the cruise ship, I recall that clearly.)

2) 2020: "This is what I'm meant to do with my life." That's how my niece described her commitment to the foster parent program. She's a wonderful woman and I'm proud of her.

3) 2019: But you got to have friends. This was when I decided to no longer play any role in planning get togethers with Mindy and John. The three of us have been friends for decades and I love them, but after the night was over, I hated them. This dinner was the culmination of literally months of setting the date and changing the date, choosing a time and then changing the time, agreeing on a restaurant and then complaining about the restaurant. It's easier to love them if I let them handle these arrangements and I just show up at the (finally) designated time and place.

4) 2018: Meanwhile, in Chicago ... While the rest of the country was mourning the Parkland school shooting, we were reeling over a shooting at the Thompson Center. A policeman was killed in a federal building. In the theater district. Surrounded by courthouses. I still can't believe this happened. Literally, nowhere is 100% safe from fucking guns anymore.

5) 2017: So this is what all the fuss is about. I watched a legendary pre-code film, Baby Face, with my movie group. It's one of those movie I'd read about without ever seeing it. It really was pretty racy.

6) 2016: That wasn't pretty. Oh, this I remember like it was yesterday! An ugly condo board meeting, where our then-president was willing to have unit owners evicted if they couldn't come up with a $5,000 special assessment ($415/month). We didn't need the improvements recommended, they would have been nice but they weren't required for our safety. Mr. President wanted them because he was looking to sell in 2017 and they would enhance resale value. So he was willing to evict people who had lived here for decades for personal gain. I vowed that night to thwart him. I did! Now this I am proud of (as opposed to the despicable Gal behavior you will read about next).

7) 2015: More than a little ashamed of myself. Because I was stuck behind two old men, I didn't board the train until all the seats were full and I had to ride all the way downtown standing and holding the strap. I was resenting them mightily until I saw one of them was wearing an Honor Flight Chicago cap, which means these men were likely Korean War vets, old enough to be my dad and they'd served overseas. Not my best moment. A reminder that I can be a better person and should try.

8) 2014: Religion. Don't Ask, Don't Tell. I was reflecting on something my minister had said during his sermon, "All religious experience is private revelation." I agree with that. As I wrote then, "My relationship with God is joyous, life-affirming and private."

9) 2013: But I want it. Personal effects of Dave Powers, first curator of the John F. Kennedy Presidential Library and one of the late President's best friends, were up for auction. Among the items was the last birthday card 3-year-old John-John ever gave his daddy. I wanted to bid, to hold history in my hands like that, but I knew I couldn't afford it. (Unbeknownst to me that day, the card went for $17,000.)

10) 2012: Enough! I saw the Green Day musical, American Idiot, and the strobes gave me a headache. I believe this is the moment I felt old.

11) 2011: And people wonder why I keep vodka in my desk. One of my coworkers said something remarkably stupid.

13) 2009: Vodka, chicken fingers and American Idol. I'd been grumpy and tried to cheer myself up with carry out dinner and my then TV passion.

How often do you look back on your blogging history?

Over the summer I became enamored of The Dollar Store. I bought all kinds of things there and it made me happy to be so penny wise. I had to wait months to discover I was pound foolish.

I discovered this morning, while I was swapping out the shower curtain liner, that that adorable translucent ones are ONE USE ONLY. That satisfying little click meant I couldn't open them. I had to break each one to remove the curtain and liner. 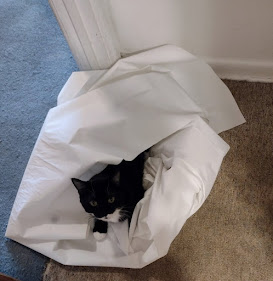 Now at less than a dime a piece, this wasn't a big loss. But it was disappointing.

There's always a bright side, though. Roy Hobbs was freaking delighted by the process of changing the liner. How thrilling to watch me stand on a stool in the bathroom! Rolling around on the old one before I could get it to the garbage was pure bliss.

We're now in our fourth month together. I'm happy to learn new things about him. He purrs while he eats and loves plastic more than any living being should. You should see him with a plastic bag! How I wish I got as excited as Roy Hobbs does.