But I want it! 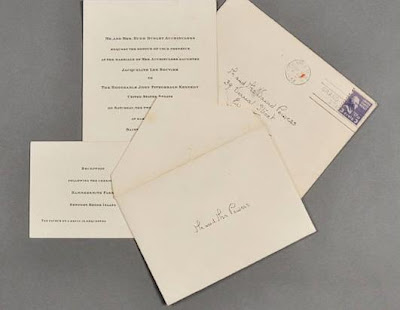 Here's an invitation to the wedding of Senator John F. Kennedy and Jacqueline Lee Bouvier. It was addressed to one of the groomsmen, Dave Powers, JFK's close friend for 15 years -- beginning with Kennedy's first foray into politics until his murder in 1963. Powers was the first curator of The Kennedy Presidential Library and Museum. And many of Powers' personal items are available today through John McInnis Auctioneers. As I understand it, a portion of the proceeds will go to the Library.

Fortunately the McInnis website is pretty difficult to navigate. Otherwise I'd be tempted to bid. And I really can't afford these things, much as I might want them.

I find the things that humanize Presidents the most touching. I have been honored to run my hand along the original banister in Abraham Lincoln's Springfield home, and as I did I wondered about the life he led there in the only home he shared with his four sons, how it helped shaped him.

Likewise, it would be a privilege to touch this birthday card, the last one John Kennedy, Jr., would give his daddy and the only one he was able to sign himself. With this card, I'd be holding history in my hands. 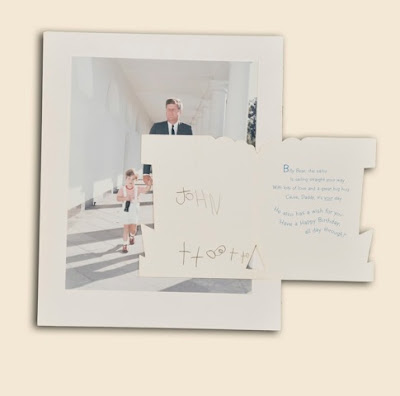 But it's not going to happen. And I suppose it shouldn't. There are so many more useful, earthbound things I should be doing with my money. But ... but ... but ...