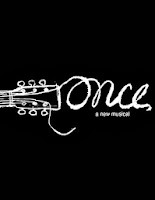 … see Once, the Tony-award winning musical now touring. The music is enjoyable, the staging is innovative and the story will touch your heart. (The ending left me quite sad, whereas my theater buddy Barb thought it was "all for the best." At any rate, it thoroughly engaged us both.)

It's based on a 2006 indie movie from Ireland that played forever at my local theater, but for some reason, I never got around to seeing. And now I don't want to. The stage play was so innovative and dear, that's the vision I want to keep. I feel the same way about War Horse. I appreciate that books, plays and movies are all different media and each should be judged on its own merit. If I don't think I can do it -- if one is so good and complete as is -- then I pass.

The shutdown, Paris, Provence and a perv

Had a lovely dinner with my friend, Barb, last night. First of all, the prix fix at 312 really is a good deal! I had a pear salad, grilled salad entree, sorbet dessert and a cran/vodka for $60 (including tax/tip). Yummy and affordable!

Her husband works for the IRS and is furloughed. The GOP is turning a pair of fiscal conservatives who lean Republican into Democrats because of this Tea Party nonsense. I wonder how many households of federal employees are going to vote Democratic after this shutdown. I feel bad for Barb's dogsitter. As long as her husband is home, they're not paying anyone else to run the pups. So I also wonder how many small businesses the capitalism-loving GOP is damaging with their tactics.

She also filled me in on her recent trip -- 2 1/2 weeks in France. Fine dining and museum-hopping in Paris, hiking through the countryside in Provence. I was happy to hear her so happy.

I was a little unhappy to hear about the contractor who is working on their second home in Hilton Head. He has texted her that he loves talking to her because her "voice is a turn on." She ignored that and then he messaged her with, "Did I go too far?" I recommended to her that her husband take over the contact from now on. She says it doesn't bother her and she can handle it. But if it didn't bother her, she wouldn't have mentioned it to me.