This one is hard for me 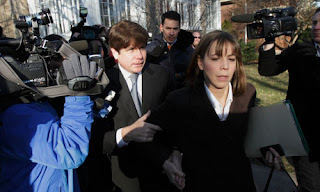 This week former Gov. Rod Blagojevich was sentenced to a staggering 14 years for ... well ... he didn't actually accomplish any of his nefarious schemes. But he had them and was trying witlessly to put them in play, and he certainly shouldn't be rewarded for his ineptitude.

But should he spend 14 years in prison? I don't know. I'm not wise enough. I just know it leaves me staggeringly sad.

• I voted for this turd ... TWICE! The first time, I actually believed in him, so my sense of betrayal is as personal as it is huge. (The second time, the Republican party in Illinois ran a candidate who was simply ridiculous and I felt I had no choice.)
• His predecessors got stiff sentences for corruption, too, and that didn't deter him, so the similar five or six year sentence I wish he'd gotten might not have sent a message to other politicians (Jesse, Jr., are you listening?). I know that the judge was trying to use this sentence as a much-needed remedy to the rampant corruption.

On the other hand, he got twice the sentence that his predecessor, Governor George Ryan, and Ryan's misdeeds were much greater. Really, check out the aftermath of his chicanery and the high prices The Willis Family paid. Perhaps it's only because Blago was such a bad crook, but he never did anything this bad.

Oh well, it's over. The toughest part of this, for me, is that when you visit the Abraham Lincoln Library and Museum you see the names of at least three felons -- George Ryan, Rod Blagojevich and William Cellini -- carved into the marble. "Honest Abe" deserves better from his home state, he really does.