How to spend a day off

I slept in. Then I went to a matinee. Playing hooky to see a Redford movie felt very deja high school. 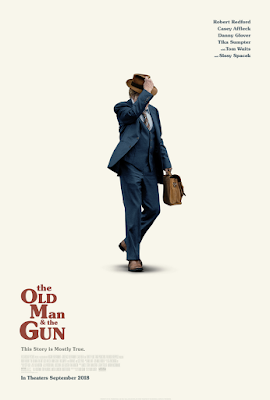 Redford has said this is his last movie. He's 82, and that famous face is certainly weathered. He walks like an old man, too. But the eyes and smile! And he's funny. Over his career, he's never gotten credit for his sly charm, perhaps because his gorgeous exterior overpowered everything else. In this movie, you believe he's a clever rogue, a lifelong criminal who has gotten by on his wits and his charm. You can see why Sissy Spacek finds him irresistible. If this really was his swan song, bravo. (It's a much better note to exit on than Burt Reynolds' sad and sympathetic last turn.)

Then I got a flu shot. Free, with my insurance. Yea! Since it was at the pharmacy in my local BIG grocery store, I picked up a couple rolls of my favorite paper towels on the way out. (I don't want to "choose a size." I want full-sized, all the time!)

Then I had a big, gooey plate of manicotti, and a salad and a beer. The little Italian bistro was playing Sinatra, as they should have.

I fantasize that, when I retire, all my days will be like this one.

On Friday, Princess Eugenie married some guy. I couldn't tell you what the bride even wore, so entranced was I by William and Kate's only daughter, Charlotte.

It was a windy day, but Charlotte didn't let Mother Nature spoil her pre-ceremony photo op. 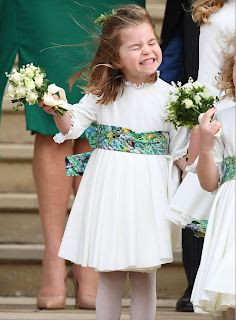 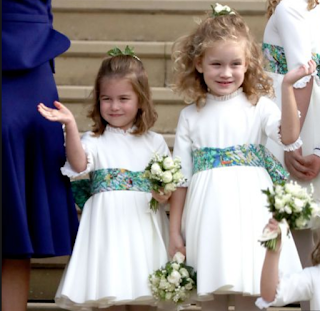 How cute is this kid?

The deed is done! 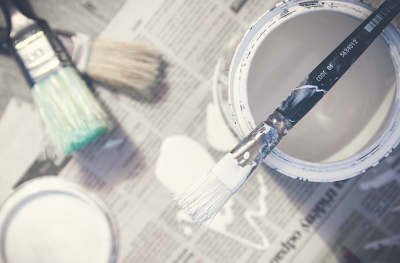 My bathroom is finally painted! And I learned that honesty is the best policy. On Monday afternoon, once it became painfully obvious that the contractor I hired wasn't showing up, and the other guy who estimated for the job was a ditz, I went back to square one. I found a new painter on Angie's List and called.

I got a person! Usually, when I've called contractors, I've gotten voicemail. I guess office staff is not a priority for painters. Getting their office manager was a very good sign.

Her name is Cindy and she was very kind. She told me that what happened to me happens very often this time of year. Painters who do exterior as well as interior try to get their outdoor jobs done before the weather changes, and consequently they get overbooked. Why don't they call and explain? She had no answer, but she says it happens all the time. So I felt less like a sucker.

I realized that, if I told her that I had to get the work done right away, I was putting myself in a less advantageous negotiating position. But what the hell. Sometimes you have to trust people. So I explained about the tub/tile guy being booked and (gulp!) paid, and that the painting had to be done before the more expensive work could take place. I told her that the radiator had to be painted at least a day before the boiler is turned on. I said, "I'm talking to you like you're my minister or something, aren't I?"

She laughed, said she understood completely and would take care of me. The estimator, Frank, happened to be available at 9:00 on Tuesday morning. She mentioned there was a possibility that she could get a painter to my place on Saturday. They don't usually book work on weekends, but if the painter wants the extra work, they make it available. That was almost great. It's supposed to get progressively colder every night and I wasn't sure the timing would work out with the radiator. But you know what? So what! The worst case scenario is a freshly painted and tiled bathroom with an icky radiator until next spring. Let's do it!

Frank came over and estimated. He talked about the Saturday option, too. He didn't promise, because it depended on whether or not his painters wanted extra work, but he led me to believe that was the best he had to offer.

On Wednesday I got an email estimate. I was expecting it to be high. After all, they knew they had me over a barrel. Also, since they have an office staff. there are more people on their payroll. The price of this efficiency is passed along to the consumer, right?

It was still less than $500, and they gave me credit for an Angie's List coupon that I hadn't even asked for! When I called to accept the estimate, Cindy told me she had good news for me. She had a painter suddenly available for 8:00 AM the next morning!

I know she pulled strings to make it happen. After the painter, Edmundo, left, I called Cindy and thanked her. Then I left positive reviews on Angie's List ... and Yelp! ... and Porch.com. Unfortunately they're not on Home Advisors, or I'd sing their praises there, too.

Even better than the lingering smell of the paint is the feeling that, by being honest, I got honest and compassionate treatment in return.