Partying with the other half

My friend Kathleen has been involved with a challenging but fascinating man for quarter of a century. They have been married 20 years now, have two very good kids (a boy getting ready for college and a girl about to enter high school in the fall) and have weathered their ups and downs. The thing of it is, though, even when they have found their relationship frustrating, their mutual respect for one another (and, of course, love) has seen them through.

Over the last five years or so, her career has really taken off. She's made it to VP in an internationally known company and is making plenty of money. In exchange for that paycheck, she works very hard. His role these past few years has been to manage the household funds -- saving for their retirement and paying college tuition for two kids -- and cleaning his and other people's homes. Her husband prefers working independently so he cleans a couple houses each week -- his clients aren't at home and he can schedule his assignments so he's home by the time his kids get home. The extra money (about $12,000/year) helps, too.

This arrangement was originally his idea, and Kathleen went along with it because she believes that the best gift she can give her kids is happily married parents. She got her own basic optimism and security from growing up in a stable home, anchored by her parents' own strong marriage.

Only their arrangement doesn't seem to be working for him anymore. She's become more successful, with added responsibilities and a progressively bigger check, while he's stuck in a rut. He can do his houses almost on automatic pilot, and the kids are older and more independent now. He believes (and he may be right) that they primarily need their daddy now to ferry them to and from after school events and friends' homes.

He's more easily aggravated by day-to-day things, especially their dog. (Their very sweet-natured dog occasionally has an accident indoors, or sheds on furniture he's been told not to jump on ... the usual hassles that come with pet ownership.) He no longer has an independent network of friends, and his family all lives in England.

And so last night the three of us went to a play by the neighborhood theater group. Kathleen knows the star from church, and most of the audience (except for her husband and me) were parishioners. Afterwards we went out for drinks at a popular local watering hole and I asked him what I thought was the obvious question -- How did a nice, devout Catholic girl and a cynical agnostic agree to raise their children in the Church? (His answer: It was more important to her than t 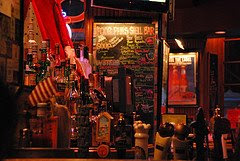 o him.) Then he told me a rather harrowing story about his childhood and how, when he was just 9, his dad died. This, and living in England during the most violent years of the English/IRA confrontations, colored his feelings about God and religion.

Kathleen looked at us so proudly as we compared/contrasted our views on faith (I'm way less conventional than she is, yet far more devout than he is).

He's awkward with small talk, and so am I. Since, through Kathleen and our infrequent meetings over the years, we already knew about one another's education and professional backgrounds, so we could dispense with that. We talked about matters of gravity, yet he was very amusing. We also talked about the Beatles and the upcoming local election.

I had a nice time with them. I know Kathleen was pleased that he and I chatted so animatedly and comfortably (being in one of my favorite bars, enjoying a flirtini, helps). I don't know that the three of us will make going out a regular event, but I wouldn't mind. I enjoyed it, she enjoyed it, but it's hard to tell definitively if he enjoyed it.
Posted by The Gal Herself at 3/21/2009 08:16:00 PM 1 comment:

Saturday 9 -- Crank Up the Tunes

1. What is your favorite 50’s band? The Everly Brothers

2. What is your favorite 60’s band? The Beatles

3. What is your favorite 60’s record album? The Beatles' White Album

5. What is your favorite 70’s record album? Band on the Run (Wings)

6. What is your favorite 80’s band? Bruce Springsteen & the E Street Band

7. What is your favorite 80’s record album? The End of the Innocence (Don Henley)

9. What is your favorite 90’s record album? Hatful of Rain (Del Amitri)