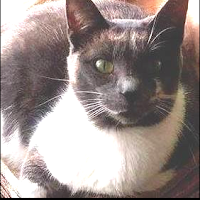 My cat Connie has become so much more social lately. She's always been affectionate with me. The first time I held her, that day we met at the animal shelter, she tucked her head under my chin and burrowed into my neck. She has enjoyed her share of pets and kisses ever since.

But she's also a cat's cat. She has always spent a good portion of her day playing and napping with her adoptive brothers. When she first joined our household, Joey was already 20 and most of his playing days were long behind him. Connie went out of her way to curl up near him, snoozing away as a little gray fur shrimp next to his slumbering bulk. She and Reynaldo have torn up the place -- literally. Racing to and fro. Batting catnip toys up and down the hall.

These days, Connie is by my side more. Chatting with me, looking seriously into my eyes. The way Reynaldo used to, but he's sleeping so much more these days.

Maybe it's the heat. Even with the ac going almost around the clock, it's godawful hot in here. Perhaps it's just too exhausting for Reynaldo to exert himself in the heat.

But it could also be the passage of time. Rey is now 14 years old. That makes  him about 70 years old, in human years. He still has his bursts of energy, attitude and mischief, but there's no denying that he sleeps more than ever before. More than Connie feels like napping.

So I'm happy to bond with my girl. But I wish it didn't mean my boy is entering the last innings of his life.