1) According to Reader's Digest, The Exorcist is the scariest movie of all time. Have you seen it, and if so, did it scare you? Yes, twice. It scared me more during the second viewing.

2) The Exorcist has been made into a TV series on Fox, premiering last month. Have you become a fan of any of the season's new shows? I haven't seen the new Exorcist but I've taken a look at Bull and This Is Us, and I like them both.

3) "Tubular Bells" is a popular ringtone for both Android and iPhone. What's your ringtone? Standard issue TMobile. So at a restaurant, whenever the phone rings in the next booth I reach for my purse.


4) As Halloween approaches, do you watch more scary shows and movies? I did when I was a kid, but not anymore.

5) Do you have any recurring nightmares? Yes and they all are variations on the theme of doing without. I'm locked out without my keys, my purse is stolen so I'm without cash or credit cards, etc. I wake up exhausted.

6) Have you carved a jack o' lantern this year? Nope

7) Do you like the taste of pumpkin seeds? They're OK.

8) What will the trick or treaters who knock on your door get? I don't have anything yet. I've been too Cub-obsessed to think about Halloween. Maybe I'll pick up something this afternoon.

9) A Halloween "let's pretend:" Back in the 1950s, a home in your neighborhood was the site of a gruesome murder/suicide. Relatives retained ownership of the house but declined to live there. During the ensuing decades, a legend grew: The tragic couple haunts the halls. Generations of schoolchildren insist they heard strange sounds and saw curtains often move mysteriously. Now the house is about to be demolished. A local charity is raising money by sponsoring a Halloween sleepover. Would you be willing to stay in this haunted house over night? I think it could be fun. Especially if I grew up believing I heard the noises and saw the moving curtains. 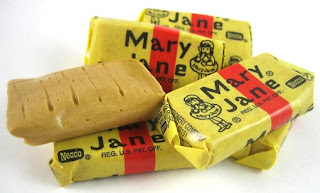 When I trick or treated, this was by far my favorite candy. Since it was no one else's, I made out well on November 1 when we traded..