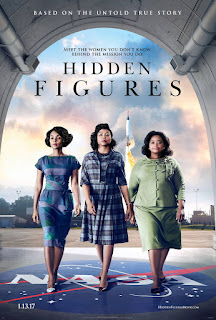 After Jackie and Manchester by the Sea, I was beginning to associate movie going with heartache. Thank God for Hidden Figures!

It's America at our best. Always evolving, willing to right our wrongs. In today's political climate, this is an especially important and moving message.

Hidden Figures is a hit, nominated for three Oscars, including Best Picture. It's the story of three women who performed the calculations at Langley that led to John Glenn's orbit around the earth.

In 1962, women were not allowed to attend Cabinet meetings, even though the information disseminated was vital to the work they were doing. There were restrictions on what they could wear -- no slacks, of course, and minimal jewelry (only Jackie-esque pearls). It was worse for these women. Being black, they couldn't attend the classes required to progress in their careers or even use the nearby "whites only" ladies' room. It only seemed like the system was conspiring against them because it was.

So what did they do? More. They worked harder, and better. They overcame. They succeeded. And they made history.

Of the Oscar-nominated movies I've seen, Hidden Figures is by far the most conventional.* But that makes it the most accessible. I've read that middle school girls in St. Louis and Milwaukee have gone to the movies to see this and received class credit. Taraji P. Henson, who plays "the girl" John Glenn depended on and trusted, spends a great deal of time here in Chicago filming Empire and recently bought out a Southwest Side theater to allow those who can't afford a ticket a chance to see it.

That makes me happy, too.

*Of the Best Picture nominees I've seen, Hell or High Water is still my favorite. It's available OnDemand. Like Hidden Figures, it's a uniquely American story, with a tragic inevitability that reminded me of Bonnie and Clyde or In Cold Blood. And it has a pair of wonderful performances at its center -- Oscar nominee Jeff Bridges and Chris Pine are the antagonists on a collision course. See it, see it, see it. Warning, though: It's more violent than I would have liked.
Posted by The Gal Herself at 2/05/2017 08:45:00 PM 1 comment:

John Glenn changed the world. And then kept trying to improve it. He was an example to us all by living with tenacity, decency and courage.

•  He dropped out of college to enlist after the Japanese attacked Pearl Harbor. He became a fighter pilot and during WWII and Korea won six Distinguished Flying Crosses. 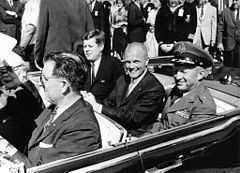 •  In 1962, he became the first American to orbit earth. It was a perfect, five hour flight. President Kennedy awarded him the NASA Distinguished Service Medal.

•  For more than 20 years he served as Senator from Ohio. He authored the Nuclear Non-Proliferation Act, which declared nuclear devices a threat to the United States and world peace.

•  In 1998, he returned to space. He was 77 when he volunteered himself as the subject of weightlessness on seniors.

He and his wife Annie were married for 73 years, until his death two months ago. She's a hero in her own right. For while she was married to a photogenic media magnet who almost always had a microphone in his face, Annie stuttered. So badly that it was rumored that she was either deaf of "retarded." Her solicitous husband did what he could to preserve her privacy and dignity.

In the 1970s, she finally received treatment she could respond to and used her newfound voice to become a crusader, in Ohio and beyond, for those with disabilities. I was aware of this in real-time but didn't really pay too much attention. Of course John Glenn and his wife were doing great things for others. That's what John Glenn did.

John Glenn, like Muhammad Ali, was an American original and an American hero. The 1960s were the years that shaped my sensibilities. And these two gentlemen shaped the 1960s. I owe them a great deal. We all do.

Seeing Hidden Figures this afternoon reminded me of Col. Glenn. I'm going to say a prayer for him tonight, and I'll apologize for not doing so on the night he died.