2) It starred Marlo Thomas as aspiring actress, Ann Marie -- the pride of Brewster, a small town 2 1/2 hours out of New York.

3) She had the most fantastic apartment on the East Side of New York, with exposed brick and built-in bookshelves. The only thing I didn't like about it was no tub, just a shower stall.

4) Ann was ever enthusiastic in her pursuit of her dream -- which was to support herself as an actress. However she often had to take part-time jobs to pay the rent on that gorgeous 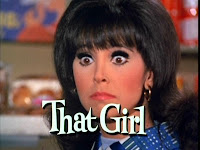 place. I remember her as a waitress, a salesgirl at the perfume counter of Macy's, and a telemarketer.

5) Every episode began with some character referring to Ann as, "That Girl!"

6) Considered groundbreaking at the time because, while Ann had a boyfriend, she was more interested in career than marriage.

7) Her boyfriend, Donald, was more established professionally -- a reporter for fictional Newsview magazine. Though Ann allowed him to pay for all their dates (this was the 1960s, after all), she never accepted financial help.

9) Other than the network censor, the only one more concerned with Ann's virginity was her dad, Lew Marie. A very protective and doting father, he had a hard time warming up to Donald.

10) I so envied Ann's trademark flip and eyelashes. Marlo Thomas insisted the hair was her own, but the lashes were augmented and the false eyelashes were uncomfortable.

11) And her clothes! Dear Lord, Ann had the most fabulous wardrobe! Especially her perfect little pullovers and all those raincoats and jackets. And her accessories! Purses that matched the shoes, necklaces that matched the earrings ... (In the clip below, you'll see she actually had a lavender print umbrella to match her sundress. Bliss!) I think I still tenaciously cling to the matchy-matchy thing in my own wardrobe (such as it is) because of the imprint this show made on my psyche.

12) In her most famous role, Marlo Thomas was nominated for four consecutive Emmys, and lost four straight times.

13) Like Sex and the City, it's a lovely Valentine to New York. But unlike the later HBO show, That Girl was actually filmed in Hollywood (at Desilu Studios).

I struggle with this 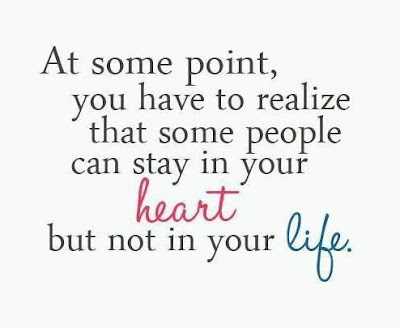 I Want Normalcy. Now, with a week and half to go on my sick leave, my life is starting to revolve around, well, my life and not my incision. And I think it's all good!

• Right now, as we speak, the handyman is installing the new ceiling fan in the den.

• Tomorrow both Reynaldo and I see doctors. Me: my shrink. Reynaldo: the vet.

• Friday I have lunch with my friend Ed and then a trip to see my State Farm agent to inquire about a new policy.

I'm returning to work on 10/17. I think the most physically taxing part will be the commute -- 90 minutes in, followed by meetings and conferences and assignments ... no nap. So I want to escalate my activities each day. I want to be ready, not exhausted.