Wah! I have to wear a mask! Wah! They want me to get vaccinated!

I wonder if those whiners look at what's going on in the Ukraine and feel shame.

Self awareness doesn't seem to be their strong suit. 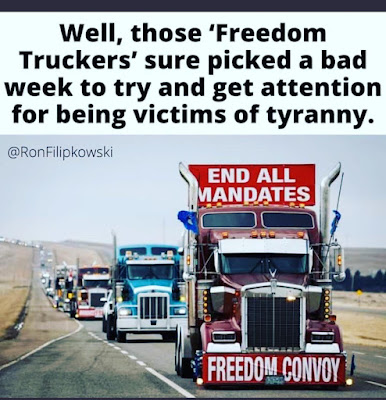 Blogger Bev Sykes turned me on to Letters Against Isolation. This group comforts lonely seniors by seeing to it that they get handwritten correspondence. Writing is what I do. I can't sing or dance, but I can write.

So far I've sent two kitty notecards with details about my own cats, and two picture postcards featuring Lake Michigan, with a note about cold our Great Lake is these days. It's my hope that having handwritten mail featuring an engaging illustration will lift the mood of seniors. I like imagining them tacking my notecard or postcard on the wall.

It's an easy way to help others, and there's little in life that's better than that!

Now I'm off to the mailbox.

Friday night I went out! Again! That's three weeks in a row that I met up with friends. It's beginning to feel like covid is fading. I'm afraid to get my hopes up, though. The mask mandate may be over Monday, but I'm keeping mine handy -- just in case. 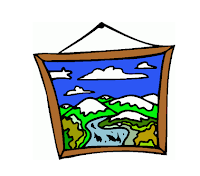 I went to a local art show with Nancy and her hubs, Paul. It was important not because of the artist but the curator, my cousin. He's a Renaissance man: teacher, musician, artist.* He chose the artist and which pieces she displayed. This was the first show he's done, and I was happy to support him.

We posed for a photo, which I posted on Facebook. It got a dozen likes. Not a one from his mother. Similarly, he never asked about his mom when we chatted over charcuterie and drinks.

My cousin and my aunt are estranged. My aunt no longer hears from her grandchildren. Her once-favorite granddaughter earned an MFA last summer, and my aunt isn't even aware of it. She now has a great grandchild she's never held. She has Donald Trump to thank. Her son and his family are appalled by what they call her "aggressive racism and homophobia." As my cousin told me, it's hard to handle it when the woman who taught you right from wrong and emphasized the importance of Christian values turns out to be loud and proud of her intolerance.

When my cousin proudly showed off photos of  "Lottie," his first grandchild and the great-granddaughter my aunt has never seen, I was sad for my aunt. I know that her noisy Confederate flag waving/BLM bashing/gay intolerance is her choice, but it has come at such a high price.

I'm trying very hard to thread this needle, to stay in communication with both my aunt and my cousin. (His was one of the first calls I received when the Cubs traded Anthony Rizzo!) Since I have always been one of the most outspoken liberals in the family, my cousin is perplexed by my tolerance with her intolerance. It doesn't help her and my relationship that she has openly scolded me for posting my own opinions on my own Facebook page. (I no longer read hers.) 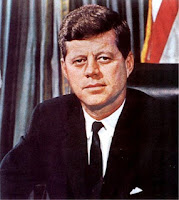 Make no mistake about it: her attitude has left me appalled, as has her abandonment of independent thought in favor of the MAGA party line. But I also remember this: when I was a little girl, she hung a picture of JFK beside her bedroom door. The teenaged girl who used her babysitting money to buy a frame for this very photo simply could not be, in her heart, a homophobic racist.

She is now in her mid-70s. She has already outlived her father and one of her brothers (my dad). I know she keenly misses meeting "Charlotte" (she refuses to call the baby "Lottie"). I don't know how much time she thinks she has left.

I keep hoping she'll be flipping through a magazine and see President Kennedy's face. Maybe it will help her remember who she really is, and things will begin to thaw.

*And he's been paid for all of that. This distinction matters. I know poets and writers who self publish or don't publish. They seem to be dismissive of my crass, commercial efforts. Whatever. My writing keeps the lights on and the water running. Their creative endeavors don't pay the bills.

I so enjoy these word associations. Let's see if we match!