Farewell to a prince

Thursday night, Joey ate heartily and played catch-the-shoelace with the other cats. Friday night, he greeted me at the door with his tail held high, snarfed down his food, and engaged in a little laser tag. But somehow, between Friday night and Saturday morning, something happened. He took a turn for the worse.

He didn't come into the bedroom to rouse me for breakfast. He didn't even want breakfast. Or dinner. I tried to get him excited by the laser, but he just looked at me with tired eyes. He stayed curled up beside me and enjoyed being petted. But I felt he was slipping away.

Today was worse. I couldn't get him to eat anything. He came to the kitchen when I called him for dinner, because he always tried to please me. But after turning up his nose on three different kinds of food, he turned to leave the kitchen and fell down.

I couldn't believe that the happy old boy who attacked and brought down a shoelace with such gusto was now having a hard time even standing! But he was dealing with a lot -- arthritis, glaucoma, kidney disease and an incurable virus. His body just quit on him.

I bundled him up and took him to the 24-hour emergency vet. If his health was deteriorating this quickly, I was afraid that the night would cause him discomfort and I wanted to spare him that.

The vet and vet tech were kind and sensitive. Joey was given a mild sedative and brought to me in this cat bed. Then they left us alone so I could say goodbye. I don't know if you can tell by this photo, but when I cooed his name he made curly paws. It was his way of letting me know he heard me, he knew I was there, he loved and trusted me. It was an enormously generous gesture for him to make. But he was always an enormously generous soul.

It was an honor to know you, Joey. 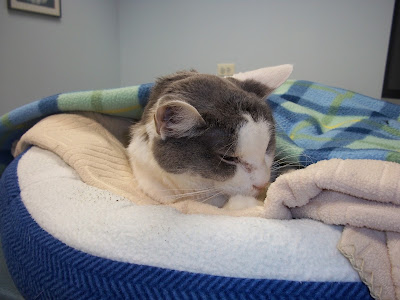