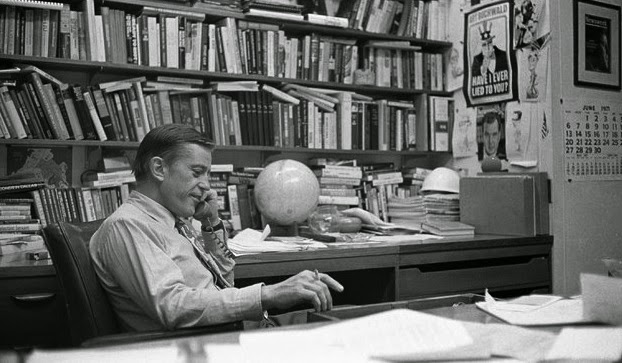 If I had a bucket list, hanging around with Ben Bradlee, was has died at 93, would be on it.

World War II veteran (Guadalcanal, no less), legendary ladies man, President's running buddy, Presidential nemesis, Pulitzer Prize winning editor of the Washington Post, father of four (including a special needs son), mentor to the two best-known newspaper reporters on the planet, gifted memoirist and raconteur … the list goes on. He was simply one of the coolest, most accomplished guys ever. He even bought, restored and lived in Grey Gardens!

If you're a movie fan, you know him as the Jason Robards character in All The President's Men.

Some of my favorite Bradlee quotes:

"We're about to accuse Haldeman, who only happens to be the second most important man in this country, of conducting a criminal conspiracy from inside the White House. It would be nice if we were right."

"I didn't hire him because nothing clanks when he walks."

Dictating a letter to his secretary: "Is 'dickhead' one word or two?"