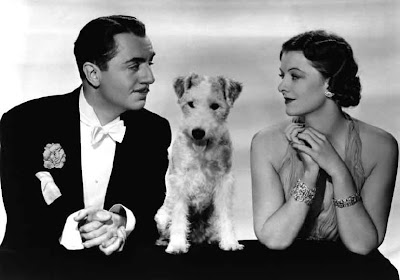 THIRTEEN THINGS ABOUT
NICK AND NORA CHARLES
My local movie theater recently celebrated its 75th anniversary but presenting some of the films it screened when it first opened in 1936. This week I had the pleasure of seeing After the Thin Man on the big screen and was reminded again how delightful William Powell and Myrna Loy were as Nick and Nora Charles.

I'm also happy to report that the theater was packed, and I saw lots of people under 35 in the audience. It's wonderful that the wit and glamor of Nick and Nora are still appreciated by so many!

1) Nick and Nora Charles were created by Dashiell Hammett in his novel, The Thin Man.

2) They are a classic case of opposites attract: Nick is a successful private detective from New York, famous for helping the coppers send bad guys up the river; his wife, Nora, is an heiress from San Francisco who is completely charmed by all the lovely, colorful characters Nick meets through his work.

3) Nick is very open about insisting that, now that he has Nora for her married money, he is retired from crime busting. Their back-and-forth is never offensive because it's obvious he loves her so, and that she believes he's her Prince Charming for rescuing her from her pretentious society life in California.

4) They have a funny, much loved and very badly behaved dog named Asta. Skippy, the dog that played Asta, had a great deal of attitude and once tried to take a chunk out of Myrna Loy.

6) The Charles' often traveled by train, and made sharing a compartment seem sexy, not cramped.

7) There were six Thin Man movies between 1934 and 1947. Loy and Powell also performed as Nick and Nora on the radio. Peter Lawford played Nick for two seasons on the Thin Man TV series.

8) The first Thin Man movie was shot in a matter of weeks. MGM was surprised and thrilled that it became such a fan favorite.

9) Just starting out in movies, James Stewart had a supporting role as Nora's old friend David in the second movie, After the Thin Man.

10) The Russell Brand/Dudley Moore story Arthur owes a lot to Nick and Nora, who were both known to toss back a drink or two.

11) TV's Hart to Hart and Moonlighting were inspired by the banter and adventures of Nick and Nora.

12) Johnny Depp wants to be Nick in the remake to be directed by Rob Marshall (Chicago). No Nora has been suggested yet. (Though I'd like to see Kate Winslet in the role.)

13) MGM's Dolly Tree was in charge of wardrobe, and she did a fantastic job. Nora's clothes -- backless evening wear, flowing dressing gowns, tailored coats -- are beautiful, even in black and white. We know Ms. Tree was versatile because she also did the clothes for the Marx Brothers A Night at the Opera, which were no where near as elegant. I wonder what it was like for a woman to build a career for herself in the 1930s ....

I want to not let the chocolate-covered spider get to me so much. I don't have cancer. Looked at through that prism, her hijinks really don't matter that much. Or they shouldn't.
Posted by The Gal Herself at 11/16/2011 12:54:00 PM No comments:

An Officer and a Kook

I went to a wine tasting, a charity affair for the United Way, in Tribune Tower with a friend who works for the paper. We found ourselves in the original suite of offices of Col. McCormick, who was publisher when the building was completed in 1925.

Col. McCormick was not only wealthy and courageous (a decorated veteran), he was also a dedicated newspaperman (an original sponsor of the Medill School of Journalism) and one of our first right wing nut jobs. For example, he opposed FDR and was isolationist during WWII. He also opposed prohibition and was outspoken in his criticism of "gangsters," back when that was a common job description in Chicago.

Every one of his stands was controversial and Col. McCormick managed to piss just about everyone off during his time at the helm of the Tribune. He knew it, and had escape routes built into his office. There are secret doors behind the paneling, just like in an Agatha Christie novel, some that lead to staircases that eventually led down to the street level.

Happy Birthday to me, Part 1

My first gift has rolled in. This poetry book arrived, a gift from my cousin Rose. I haven't read poetry in decades, but I will read this.