By 1943, Edith Head was one of Hollywood's most prolific costume designers. She got where she was through energy, hard work, and her ability to forge personal relationships with the stars she dressed. She wanted them to relax and feel comfortable with her and with their clothes so they could concentrate on their performances, not their wardrobe. This approach had brought her much success with Mae West and (her favorite) Barbara Stanwyck. Now she was dressing Vera Zorina for Paramount's production of For Whom the Bell Tolls.

In 1943, Ingrid Bergman was Hollywood's It girl. Intermezzo, Dr. Jekyll and Mr. Hyde, and, of course, Casablanca had all been major hits. When Paramount execs decided that Zorina just wasn't believable as Maria, the influential and highly opinionated author of For Whom the Bell Tolls, Ernest Hemingway, strongly suggested that Bergman take her place.

As was her practice, Edith began the process of dressing Ingrid by just talking to her. It was Bergman's idea that Maria wear men's clothes. Since Ingrid was a "big girl" by Hollywood standards -- size 14 -- it was easy to find appropriate clothes in the men's wardrobe department. The two women were very happy with their off-the-rack discoveries, as was their director, Sam Wood. But Bergman was under personal contract to David O. Selznick, and he was aghast to learn that his actress was being dressed in wardrobe that had been previously worn onscreen by cowboy extras. So much to Edith and Ingrid's amusement, new clothes were purchased and time and expense taken to tailor them for Ingrid. Then they were bleached and dyed to look old and worn. 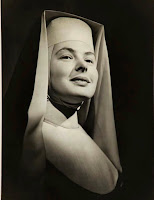 In 1945, Edith and Ingrid were happy to be reunited for The Bells of St. Mary's. But Edith found the film frustrating because there was so little for her to do. Once again she was presented with a graceful and beautiful leading lady to dress, and her job consisted mostly of making sure the Catholic Church would approve Ingrid's habit. 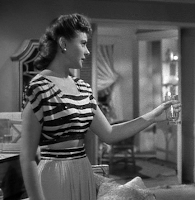 It wasn't until 1946, and Notorious, that Edith got to dress Ingrid the way she wanted to. This assignment was a far cry from the menswear and ecclesiastic garb of their previous collaborations. Finally Edith got to put her leading lady in street clothes, evening clothes and even bedclothes. The director, Alfred Hitchcock, was known to be very particular about how his films looked, but on Notorious, he limited his wardrobe input to broad stroke requirements of color and function. (For example, "In this scene, her skirt must be dark and full enough to brush against the desk.") Beyond that, he gave Edith and Ingrid free reign. And what fun they had! 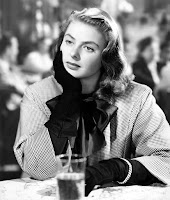 Early in Notorious we see Ingrid in a racy, bare midriff blouse. The stark contrast of the black and white horizontal stripes make her the most conspicuous woman in the room. This is the "real" Alicia, sensual and brazen. For the rest of the movie, the clothes we see Alicia wearing are her wardrobe as an undercover agent. Now she's demure and covered up. After all, a spy must blend in, not stand out. 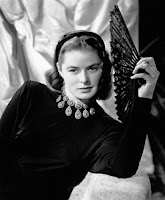 Ingrid was taller and more muscular than most of the actresses Edith dressed throughout her long Hollywood career. Ingrid was so naturally beautiful,and moved so well, that she was better served by skillful tailoring than glamorous flourishes. Edith took great satisfaction in using restraint to make her leading lady look "marvelous."

After doing three films together in rapid succession, Edith and Ingrid wouldn't work together again for decades, until 1965 when they made The Yellow Rolls Royce. I have not seen this film, but in publicity stills it appears that Edith still believed "less is more" when dressing Ingrid. 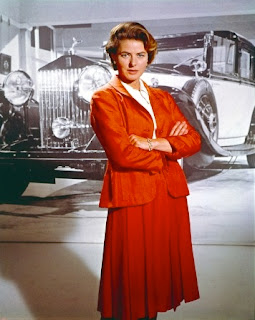 Interestingly, in interviews Edith gave at the time and in her memoirs, it was Shirley MacLaine she mentioned in connection with The Yellow Rolls Royce, not Ingrid Bergman. Throughout her career, Edith tried to stay relevant by concentrating on the trendy girl, Hollywood's girl of the moment, and by that time,  Shirley was in the spotlight.

I could find nothing about a falling out between Ingrid and Edith and I suspect there wasn't one. For while Bergman may have had fun playing clothes horse in the Hitchcock movie, she was really more interested in the script and character motivation than to her wardrobe, so I don't think she minded when she was no longer the focus of Edith's attention.

Today's Happy Cone goes to my fur family. I had a rough day at work, especially at the end of the day. When I got home, I was greeted by three very hungry critters. I always enjoy meal times with them because enthusiastic eaters tend to be healthy felines.

After dinner (both mine and theirs), I curled up to watch the game. Each of the cats has taken a turn beside me. First Connie, whose style is to butt her head against my hand and then crawl into my lap for a cuddle. Then big old Joe rubbed up against the MacBook on my lap, just to make sure I was aware that he was aboard the futon, before curling up against the pillow. And now I'm being treated to the gentle vibration of Reynaldo's purr as he lays here patiently, knowing that every now and again I'll interrupt my typing to stroke his back.

I feel their love and I am happy.

If you want to play along, just come back here (meaning to this blog, not this individual post) each day in August, looking for the happy chocolate cone. Every day I will try to have a post with the headline: August Happiness Challenge: Day [X]. Leave a comment and then post your own daily happiness, with August Happiness Challenge in the title to make it easy to find.
Posted by The Gal Herself at 8/26/2015 09:58:00 PM 1 comment: 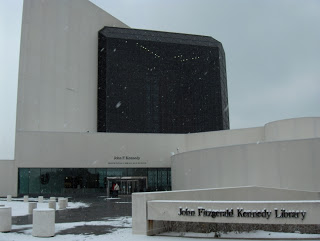 If only I had a sense of adventure, more money and more guts, I'd go for this job. I think working here would be spectacular!

Vice President, Marketing, John F. Kennedy Presidential Library and Museum
The newly created position of Vice President, Marketing will report directly to the Chief Operating Officer (COO) and is responsible for developing and executing strategies to transform the Foundation’s marketing functions. This role will be key to the successful implementation of an ambitious Long Range Strategic Plan, revitalizing the Foundation’s marketing efforts, and preparing for the activities taking place in 2017 celebrating the Centennial of President Kennedy’s birth. He or she will work in close collaboration with the VP Communications and Digital Media, in coordinating content management and new marketing activities for the Foundation.

I like Boston! I know how to get to the Library on the MBTA!

Oh, well. I'm really not at all qualified and not-for-profits don't pay very well ... I hope whoever gets the position aces it.

Today's Happy Cone goes to sharing my team with America. Last night I had a rough commute. A man asked me for $15 to help him and his sister get home. I gave him a buck and he was all pissy. "I'd do better to steal," he sniffed. Then I ended up beside a man who kept dialing his mother and calling her a "fucking bitch." Not fun, not relaxing. 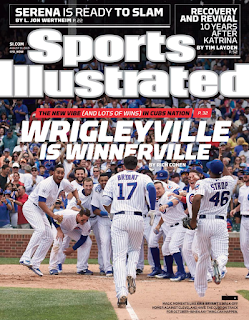 Then I got home and waited for the game. My guys are on a West Coast swing, so it
didn't come on until 9:00. It was worth waiting for. We beat the Giants 8 to 5. AND I found out that my heroes will be on the cover of the next SI. I'm glad America will get to know these guys. They really are great.

A while back a grumpy gus commented dismissively about baseball, responding to my rhapsodizing by saying she just "didn't get it." How sad for her! For watching America's pasttime, hearing the crack of the bat, watching the ball sail out of the park is so good for what ails me.

If you want to play along, just come back here (meaning to this blog, not this individual post) each day in August, looking for the happy chocolate cone. Every day I will try to have a post with the headline: August Happiness Challenge: Day [X]. Leave a comment and then post your own daily happiness, with August Happiness Challenge in the title to make it easy to find.
Posted by The Gal Herself at 8/26/2015 08:28:00 AM 1 comment: