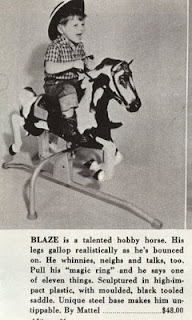 07. Personal memory? Finding Blaze under the tree on Christmas morning the year I was four. I had been introduced to Blaze through the TV commercials and knew we were destined to be together. I remember telling Santa he was available at Sears, Roebuck and Co., in case the elves needed help.

My friend from the Keys was incommunicado Saturday, and I admit I was pissed. I wanted to get his birthday/Christmas gifts in the mail and all I had for him is his PO Box, no street address. Neither UPS nor Fed Ex delivers to PO Boxes! 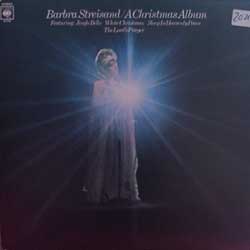 I wanted the good folks at the UPS Store to pack his gift because included with it was one from my uncle. He's been gone just over a year now, but I only recently got access to his personal belongings. All I took of his was one record album. He mentioned to me once, years ago, that after his death, he wanted my friends in Keys -- whom he had met and liked -- to get his Barbra Streisand albums on vinyl. My uncle believed that they would be collector's items (they aren't; he didn't take good enough care of them, but never mind that) and he wanted my Babs-loving friends to have them. All that was left after family and friends picked through his stuff was the original Streisand Christmas LP. It's nearly 50 years old, and I couldn't have it broken en route. I mean, it made it through DECADES and then I get hold of it and it breaks? No. Not acceptable.

So I left messages all day long -- calling and texting his cell. "What's your address?" I was getting angry. After all, many a time while dining with me I've seen him check his phone. Now, all of a sudden, when I need him, he develops manners? And really, how hard a question was I asking? It's not like he'd have to look it up. I JUST NEEDED HIS STREET ADDRESS!!!

Well, he called me at 7:00 Sunday morning to apologize. (He forgets that Chicago is behind Key West, not ahead.) He was at the funeral of the mother of one of his former students. She committed suicide, and her son was the one who found her hanging in the bathroom. My friend and his lover spent the day with the boy -- now at nursing school in Miami -- and offered support. The kid is so close to his degree, they wanted to let him know he's not alone and that they will do whatever they can to help him stay with it and graduate.

The community college unceremoniously canned my friend earlier this year. Budget cuts. I understand the economic realities of the Recession but still, a teacher like my friend is too valuable to lose. He had this boy in his Spanish class years ago, but as far as he's concerned, the kid is still his student and still entitled to his full support.