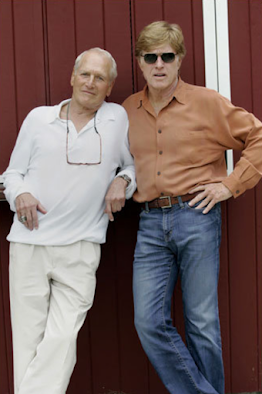 As I slowly prepare to bid adieu to the contents of my DVR, I'm rewatching some of my favorite movies and it's turning into a Newman-Redford film festival. God I love these two!

Over the weekend I watched Up Close and Personal (1996). 60-year-old Redford plays Warren Justice, a former network anchor on his way down, now a producer at a Miami affiliate. Michelle Pfeiffer is the much-younger Tally Atwater, the girl who wants to be Katie Couric (this is 1996, remember?) but has no idea what it takes to reach her goal. He mentors her and they fall in love and it's completely believable. He has scenes where he's caught gazing upon her with such affection that I get all swoony. And then of course there's his cool.

Another character tells him, "You stake out the moral high ground and everybody else gets altitude sickness."

I love Warren Justice so much! This is the movie that introduced "Because You Loved Me" by Celine Dion. He saw the best in her and he willed her to success because of his faith in her. Sigh ... 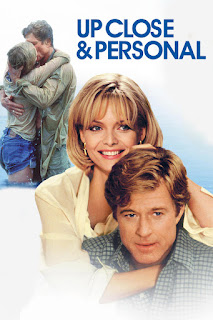 As I write this post, I'm watching Harper (1966). Paul Newman is the detective of the title. He's in the honorable PI tradition of Bogart and Dick Powell. He's cynical. As he likes to say, "The bottom is filled with nice people. Only bastards and cream rise." But he accepted the case, and now he's got to solve it. For all his gum snapping and wise cracking, he has a code. He has to do the right thing, as he sees it. That's key. His compass doesn't have the same true north as everyone else's.

The movie is a very good, very tight little mystery, so I won't do it the injustice of revealing the end. But no matter how many times I see it -- and I've seen it a lot -- it surprises me. Not the resolution of the mystery, Harper's response to it. His morals may be ambiguous, but his guts and personal integrity are in tact. 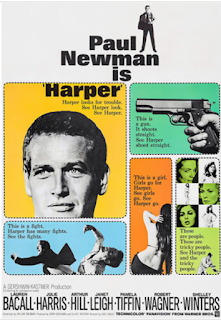 I've got more Newman and Redford movies to watch before Xfinity empties out this old DVR. I'll end my little film festival with the coolest double feature imaginable: The Sting and Butch Cassidy and the Sundance Kid.