The nature of celebrity 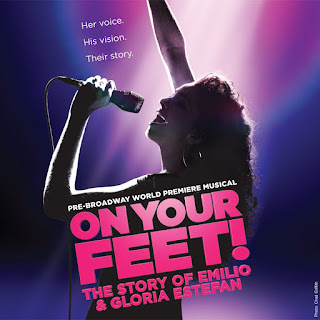 Last night we saw On Your Feet, the Broadway-bound musical that's premiering here in Chicago. It's the life story/love story of Gloria and Emilio Estefan. If you like her music (and I've been singing "Conga" to the cats all morning), you'll like this production. And Emilio wishes he's as hot as Josh Segarra, who plays him so adeptly.

For me, the most interesting part of the evening was my friend Barb's reaction. She was only there because the show was part of our subscription series. As we were taking our seats in the first row of the loge, she said, "What is this again?"

Barb, who is gloriously pop culture challenged, knew little or nothing about the Estefans. The 1990 bus wreck, which is an integral part of the show, was a newsflash to her. She liked the music, but it was clear that she was hearing some of the hits for the first time.

During intermission, when Barb came back to our seats, I pointed to the commotion on the main floor. People were gravitating to the center like antelope moving to a water hole. There were Gloria and Emilio, watching the preview shows from the seats, just like the rest of us.*

"Which one is she?" Barb kept asking, squinting over the railing.

"The one with her arm around the woman in the coral jacket."

"I don't recognize her. What's she doing now?"

"Taking a selfie with a woman in a black blouse."

Because Gloria Estefan is famous.

* When The Last Ship and The Producers had their pre-Broadway runs in Chicago, Sting and Mel Brooks chose to watch from the wings.