Sunday Stealing: The Put Your Questions in the Box Questions

1. Where were you three hours ago? Fighting to stay awake. It's a lazy Sunday and I'd be just as happy to crawl right back into bed.

2. Make a confession.Yesterday morning, while watching a Will and Grace marathon, I realized anew that in many ways, Will Truman is my ideal man. 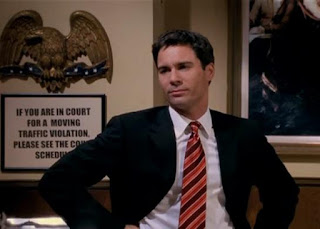 7. Last person you hugged. My nephew

8. Something you miss. My waist

9. What song is stuck in your head at the moment? "Benny and the Jets"

10. Favorite quote. "Above all, be the heroine of your life, not the victim." Nora Ephron

11. Favorite band. The Lads from Liverpool

12. Something your excited for. Today's Cub game. Kyle Schwarber seems to have his groove back.


14. What type of phone do you have? An LG piece of shit with a cracked screen.

15. Favorite animal. I have a soft spot for just about all of them.

Every year my nephew and I spend a summer day together. I give him a selection of activities and he chooses. In years gone by, we've done things like The Taste of Chicago, Lollapalooza and The Chicago History Museum. This year, we went to The Friendly Confines of Wrigley Field to watch the Cubs and the Pirates.

The weather was perfect: clear and the mid-70s. Instead of taking the el to the game, which is fastest, we took the #22 Clark Street bus. It makes regular stops in The Loop, Lincoln Park and Wrigleyville, so for $2.25 he got a nice little tour of Chicago on a lovely day.

Then we ate pizza and watched the game. Jake Arrieta was on the mound, who was a pleasure to watch until he wasn't. He hit 95 pitches rather early on and, had Joe Maddon asked me, I would have pulled him them. (Joe didn't ask me.) We saw Kyle Schwarber get two hits -- one a dinger! We watched the sun set and the full moon rise over the most beautiful cathedral baseball has ever seen. 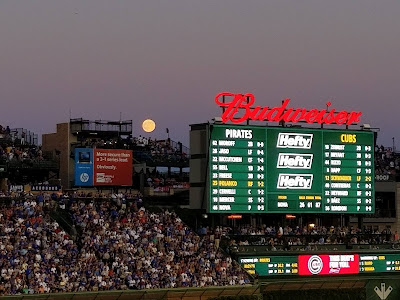 I bought two new t-shirts (because no, I cannot have enough Cub t-shirts) and wandered through Wrigleyville for a while, waiting for the crowds to thin. We stopped for grilled cheese sandwiches at an all-night diner* and I got him home by 1:00 AM.

I enjoyed showing him the parts of the city that draw young people in to party. He'll soon be a high school senior, so I know he's heard about the lure of the North Side. I also enjoyed talking to him. He just watched All the President's Men for the first time and was very impressed. He's thinking about colleges, and right now he's looking at majoring in political science at Western Illinois University.

I wish I knew more about his internal life. I worry that he's not happy or content. I shared the struggles I had within our family, resurrecting ancient history. I did it because I wanted him to know that I don't expect teen years in our family to happy. I also used his fondness for All the President's Men (produced by Redford) as a segue to Ordinary People (directed by Redford).

Which is not to say we didn't laugh a lot. We did. It's impossible to not have fun at Wrigley Field.