Why I love the internet 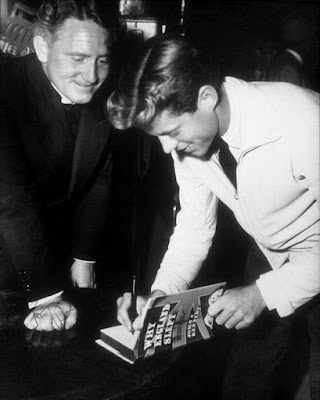 Late 1940. Spencer Tracy, in priest's garb as he reprises the role of Father Flanagan in Men of Boys' Town, gets his copy of Why England Slept signed by the author, 23-year-old John F. Kennedy.

At the time, Tracy was a hugely respected actor, having just become the first man to win back-to-back Best Actor Oscars. Kennedy was a recent graduate of Harvard. His dad had been a movie producer and undoubtedly had a hand in setting up this publicity photo.

I think this is the coolest thing I've seen all week.