It's no longer whether they win or lose

The Cubs have been very good for the past 20 years: Eight trips to the play-offs and, of course, the 2016 World Series. Both Lou Pinella and Joe Maddon won Manager of the Year. Geovany Soto and Kris Bryant both won Rookie of the Year. Jake Arrieta won the Cy Young and Kris Bryant won MVP. Derek Lee, Javier Baez and my two fave raves -- Greg Maddux and Anthony Rizzo -- won Gold Gloves for exceptional fielding.

It's been fun. Winning is better than losing.

On the other hand, I'm a lifelong Cub fan. I remember seasons where they finished 15 or 20 games out of first place. When winning just one more game than we lost felt like a dream come true. In a way, losing seasons are fun, too, because there's no pressure. Instead of the outcome of all 9 innings, I could concentrate on the moments, and say to myself, "That was an exciting catch," or "What a great at bat!"

So why have I found this extended losing streak so shattering? Because every loss brings us closer to the end of Bryzzo. Bryant and Rizzo. The heart of this team. Both of their contracts are up this year. The owners (BOO! HISS!) have not offered either of them an extension. If the team did well this year and appeared poised for the play-offs, management might keep the them together. After this 10-game skid, Kris Bryant might be gone before the trade deadline this month. This could very well be Rizzo's last season in Cubbie blue. 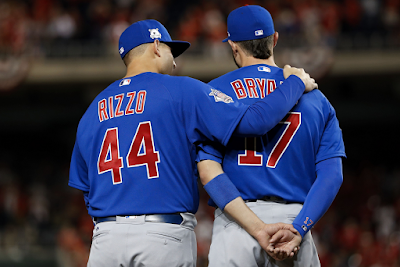 They attended one anothers weddings. KB always supports Rizz' charitable ventures (my favorite was the year he surprised fans and raised a ton in tips by acting as a waiter at Rizzo's Cook Off to Knock Out Cancer). They're funny together. They're my guys.

So it isn't whether they win or lose, it's how much longer will they be my guys.