The "Because You Annoy Me" Edition

I'm glad this week has come to an end. I've been out of sorts and easy to rile, though I think I've kept that to invisible to others. Which is good. No one needs to see that. But, since a wound can't heal until it's cleansed, I'm getting all the debris out here in this post.

1) Congratulations. You just said the completely wrong thing! Michelle, the New Girl, has a good heart, a sharp intellect and a very, very big mouth. On Tuesday, when the topic of the plane crash came up, she was more than a little heartless. It was all unwitting -- after all, she didn't realize how many of us had a connection to one of the victims -- and afterward she must have felt terrible, so I let it go. But naturally, I was unsettled and pissed.

2) But no, you don't. Really, you don't. One of my more annoying coworkers -- though this week it must be admitted everyone was annoying me -- was bragging on herself. Again. This time she was telling Michelle, the New Girl, that she has a "photographic memory." Bull. Shit. I am the woman's short term memory. She never remembers anything we've worked on, or who the account team was, or ... or ... or ... She bases her brag on her ability to recall the moment, when she was in pre-school, that she helped her mother hang sheets on the line in the backyard. She can't even remember what happened immediately before or after she helped Mom. Over and over this week, when I had to remind her of something, I wanted to ask, "But what happened to your photographic memory?" 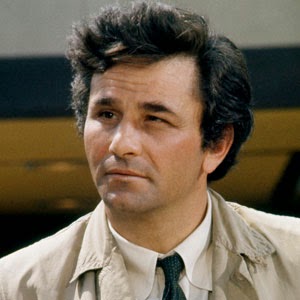 3) Are you fucking kidding me? Right after I heard about the plane crash, my oldest friend confessed that she had been too depressed to get out of bed over the weekend, meaning she missed Easter because of the blues. She moved 2000 miles to California specifically to spend holidays with her beloved cousin Sharon and instead of doing so, she stayed in bed? And her cousin Sharon didn't drive over to see what was wrong? I didn't think I could be more annoyed by this until she told me what triggered her depressive episode: Peter Falk died. In 2011. She never met Peter Falk and gave him little thought during his lifetime. But she and I have recently gotten into the Columbo reruns on Me-TV, and realizing he was gone sent her into a tailspin. On the one hand, I'm thinking of a woman who is faced with the most crushing circumstances I can imagine, and on the other hand, I'm listening to another who isn't doing the bare minimum (like getting out of bed and driving to her cousin's) to make herself happy.

I know that's unfair. I know my oldest friend's depression is a disease, and expecting her to "snap out of it" is like expecting someone to "snap out of" asthma or diabetes. I also know that she was trusting me when she told me about Peter Falk, trusting me to understand and not mock. And so I didn't mock and tried to understand. But I was still tres annoyed. Privately. To myself. But yes, even though she couldn't hear me, when she told me about Peter Falk my inner voice was screaming, "Are you fucking kidding me?"

So what's been wrong with me this week? I haven't been feeling well. My twisted ankle (now nearly two weeks old) is healing well but slowly. I think I miss working out. I'm still learning how to manage my GERD. I was felled by a migraine Wednesday morning. And yes, that plane crash has been haunting me.

But the week is over. And now I'm going to face forward, enjoy my weekend, and try to have a happy weekend and a better week.