I did the right thing


… but it hurt nevertheless. 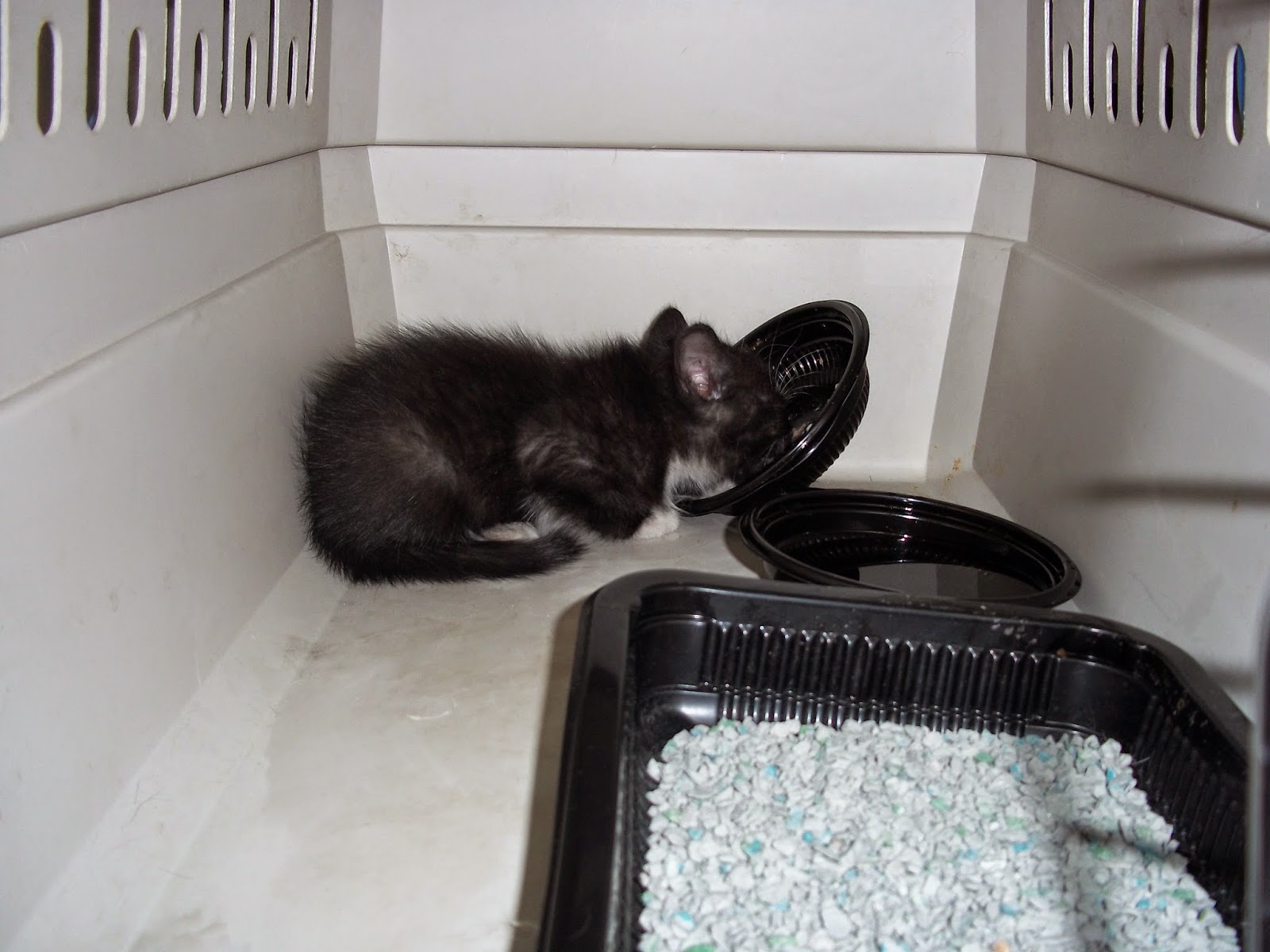 On Sunday I was walking over to the local pizzeria, just around the corner from my home, when I saw a tiny streak race across the busy street and settle under a car. The tail was too thin for a squirrel, too long for a woodchuck. As I passed the car, I saw this face peering out from next to the car's rear tire.

I leaned into the car and asked the driver to please not move the car. They could have squished her without even knowing she was there. Then I dropped down to coax her out. Of course, she didn't want to be coaxed, so I had to reach in and pull her out from the wheel well. I didn't know it at the time, but I was covered -- face to waist -- in grime.

She cried a lot and clung to me. I thought Charlotte and now Connie were little. I had no idea how little felt in my arms until I picked this little girl up! I stuck my head into the pizza place and told the owner I'd be back in a few minutes to pick up my order. He seemed surprised and confused by my filthy appearance and the cat in my arms, but he said he'd hold it for me.

I got her home and rushed her into the den without my cats even knowing she was here. I pulled down Joey's big carrier and set her up with water and a makeshift litter box. She is sooooo small that I was able to use a tray from the Lean Cuisine as her box. When she calmed down a little and huddled in the corner, I was worried that she was overheated, maybe dehydrated. So I mixed a wee bit of canned cat food and human baby food together into a mush and gave it to her. Plenty of liquid there to sustain her until ... until ...

Until what? She might have worms or fleas. Joey is 18 and, while enormous, he's naturally not as strong as he was in his prime. I have to be careful what I expose him to. And Reynaldo had begun prowling outside the den door. He alone figured out what was going on and I'm not sure he was OK with it. After all, the vet attributes much of Rey's bad behavior to his "unusual bond" to me. What if having a tiny kitten, one who would demand much of time, would trigger Rey's destructive behavior again?

My adorable new kitten Jeri (that's how I was now thinking of her, as my kitten and I named her Jeri after the Jerry Lewis Labor Day Telethon) was going to require a lot of work and a lot of money. It would mean four cats in a 2 BR apartment, and I wasn't sure that wasn't just nuts. These were the thoughts roiling around in my head as I washed my face and arms and changed my clothes and went for my pizza.

The owner of the pizza place told me that people had followed me in to ask about me and the kitten. I hadn't stopped to think of what a spectacle I'd made of myself on Main Street, dropping my purse on the sidewalk and virtually crawling under the car to retrieve Jeri. I was so embarrassed! But the proprietor very kindly gave me a "hero's discount" on my pizza. 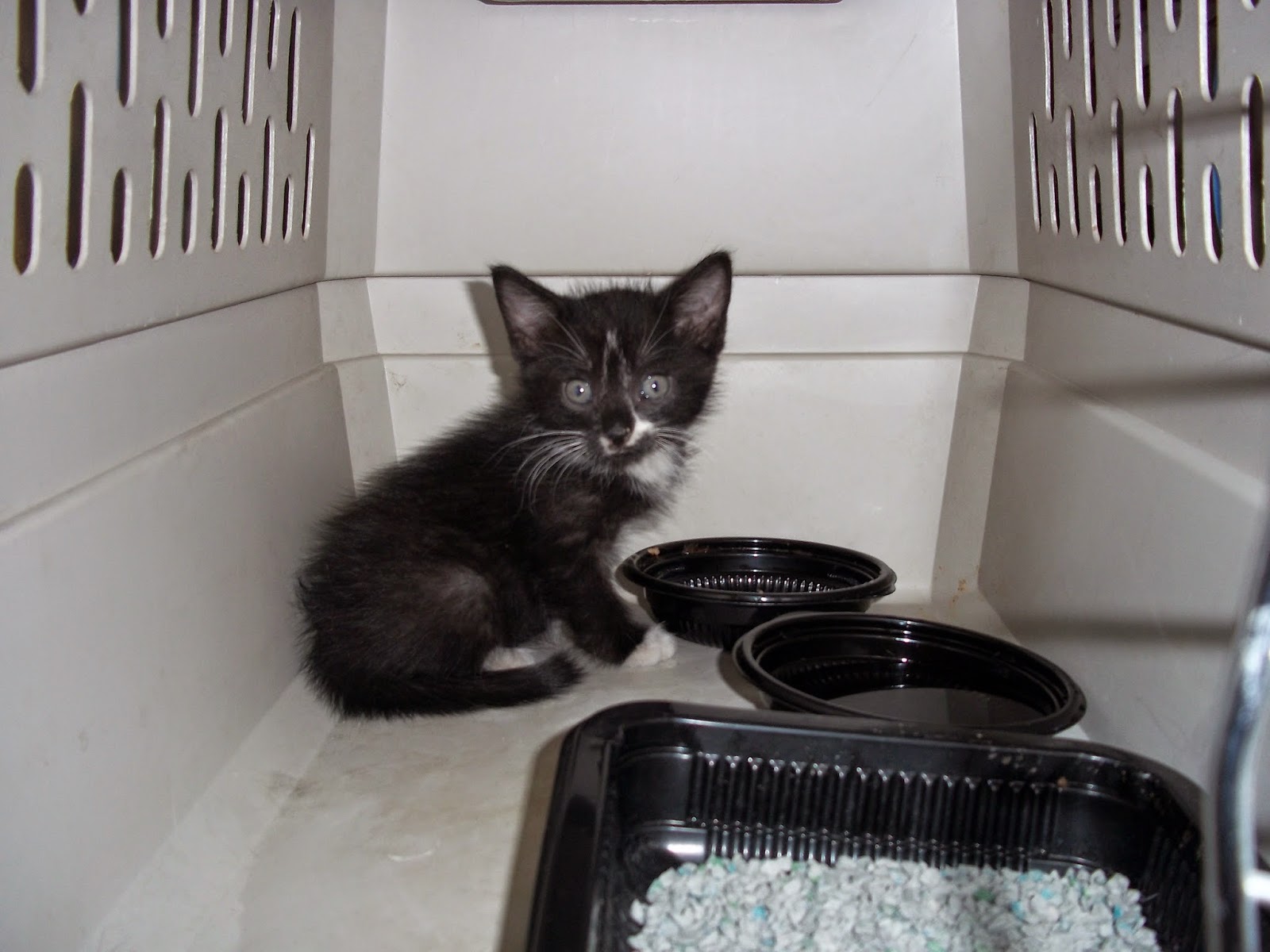 I called the local animal shelter -- the no-kill organization where I adopted Charlotte and Joey -- and spoke to the manager. She was lovely. She explained that they were closed and would stay closed to the public until Tuesday morning. But she advised me to call the police and surrender Jeri to them. The shelter is never closed to the police, and if we did it this way I wouldn't be assessed any "surrender fees" because I wouldn't be the one turning her in. I think she could tell that if I kept Jeri until Tuesday, I'd be keeping her forever.

I hadn't given the shelter manager my name, so I was under no obligation to turn Jeri in. I lay on the floor in my den, gazing at my new charge. Damn, she's cute! And clearly not a stray. The street noises and trains terrified her, but she was good curled up in the carrier in the quiet of my den. I weighed the pros and cons of keeping her. So many cons to very few pros. Only the biggest pro was powerful -- I WANTED TO KEEP HER!

But that would be selfish and childish. Jeri is adorable and someone will adopt her and give her a forever home. Joey, especially, and Reynaldo are my responsibility. And little Connie had been "rescued" from a "hoarder" who had at least 6 cats. Would it be fair to give her a life in an apartment filled with four felines?

So I called the police and met an officer at the shelter. He couldn't have been nicer. He does this all the time with dogs, but Jeri was his first kitten "surrender." He told me about his cat when he was a kid -- he found her all bloody in their backyard after a fight with a raccoon or squirrel. His family tended to her and she lived to be 18, just like Joey.

The shelter employee was a bitch. When I asked her if I could say goodbye to Jeri, she told me to "make it quick." She also seemed pissed that I wasn't giving the shelter Joey's carrier. I was nearly at the end of my tether at this point but I resisted telling her to eat me. My friend Edgardo -- a much nicer person than I am -- always reminds me to have extra compassion for employees who have to work on holidays. It's a comfort to know that her boss, the woman I spoke to earlier, was kind and compassionate.

Jeri is where she should be. I know that. But I really wanted to keep her. Or him. It occurs to me that maybe I should have spelled it Jerry. I never did look under the tail.

Today's happiness -- The other end of the phone. I was having a tough time with a big decision (more on that in a moment) and I called my oldest friend. I knew she'd be home, even as the rest of the country was enjoying a lovely Labor Day weekend, because she was battling a tenacious stomach bug. She said all the right things, as she reliably does. I am blessed with good friends.
Posted by The Gal Herself at 9/01/2014 09:37:00 AM 1 comment: