Over the weekend, Rick Santorum ragged on John Fitzgerald Kennedy and how he handled "The Catholic Question" back in 1960. According to Mr. Santorum, JFK said that people of faith "have no role in the public square. You bet that makes you throw up. What kind of country do we live that says only people of non-faith can come into the public square and make their case. That makes me throw up.”

It's obvious to me that Mr. Santorum never read Kennedy's remarks. I have. They are wise and measured and profound. I will repeat them at the end of this post. And if Santorum is serious in his disagreement with JFK, then I think I'd like Pope Benedict to appear alongside him at the next GOP debate. After all, the Vatican seems to be where Santorum will be getting his guidance, not our Constitution. 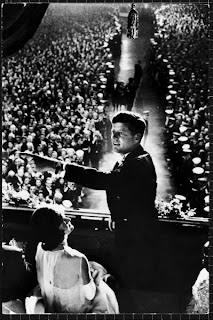 I believe in an America where the separation of church and state is absolute, where no Catholic prelate would tell the president (should he be Catholic) how to act, and no Protestant minister would tell his parishioners for whom to vote; where no church or church school is granted any public funds or political preference; and where no man is denied public office merely because his religion differs from the president who might appoint him or the people who might elect him.

I believe in an America that is officially neither Catholic, Protestant nor Jewish; where no public official either requests or accepts instructions on public policy from the Pope, the National Council of Churches or any other ecclesiastical source; where no religious body seeks to impose its will directly or indirectly upon the general populace or the public acts of its officials; and where religious liberty is so indivisible that an act against one church is treated as an act against all.

For while this year it may be a Catholic against whom the finger of suspicion is pointed, in other years it has been, and may someday be again, a Jew — or a Quaker or a Unitarian or a Baptist. It was Virginia’s harassment of Baptist preachers, for example, that helped lead to Jefferson’s statute of religious freedom. Today I may be the victim, but tomorrow it may be you — until the whole fabric of our harmonious society is ripped at a time of great national peril.

John and Robert Kennedy both spoke so beautifully, even when they were talking off the cuff, and used exquisite grammar. Even if I didn't agree with their content (though I almost always did), they were a pleasure to listen to. (She said, ending a sentence with a preposition.)

This Dog Has His Day

Yes, The Artist was a wonderful movie. And yes, Jean DuJardin was a charming and compelling leading man. But for me, the movie (and therefore its Best Picture Oscar) belongs to Uggy. I was so happy to see him included in the celebrations during last night's Oscar telecast.

I heard that, since Uggy is now 10 years old, he may be retiring from long-format film and TV work and will just concentrate on commercials from now on. If that's true, I'm happy see he went out on top.

I LOVE that dog!