Day 3 of the virtual fest had me diving deep into Watergate. My current book is The Watergate Girl, a memoir by the prosecutor who questioned Nixon's secretary, Rose Mary Woods, so my head is here anyway.

I watched Scoop, which gives an overview of journalism in the movies. Then I saw TCM's Ben Mankiewicz' interview with Carl Bernstein. There was also a promotional featurette from 1976. where Robert Redford himself interviews Ben Bradlee about how it feels to watch your life portrayed on the big screen. I got the feeling Bob Redford kinda wished he could be Bob Woodward. 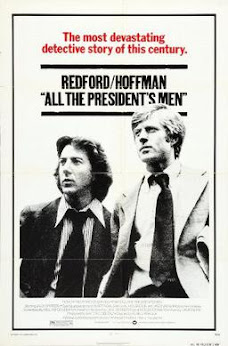 Fortunately the Cub game broke very bad very early, which left me free to watch All the President's Men (1976). When I think of this movie, Jason Robards as Ben Bradlee comes to mind. He's so funny, elegant, profane and charismatic, you can't take your eyes off him. But today, I especially enjoyed Redford. There's a controlled tension to his turn as Bob Woodward. Dustin Hoffman has the showier role as Carl Bernstein, but he feels like a bit of a hamhock at times. (I must admit, though, that since reading my beloved Nora Ephron's accounts of her marriage to Carl Bernstein, my overall opinion of him had dipped over the years.)

Another thing I now appreciate, that I hadn't noticed before, is the use of light and shadow. When Woodward and Bernstein are at the office, they are under fluorescent lights. Everything is open and visible ... and safe. When they're out digging for the story, they're almost always in shadow. On porches, in darkened living rooms, in a parking garage ... and uncertain. The use of light is important to creating suspense in a story where we all know the outcome. See? I'm learning things from the "extras" TCM is giving me!

1. Five problems with social media. MISINFORMATION! It can be a cesspool. Let me use these "five" to enlighten any of the confused.

d) Qanon has been thoroughly discredited and the only "storm" on your horizon will occur naturally when warm, moist air rises into cold air.

2. A place you would like to live, but have never visited. Quebec. Or Maybe Montreal. Not Toronto, though I loved it and felt very much at home there, because it's a place I have visited.

3. Someone who fascinates you and why. Nicolle Wallace. She's my Republican BFF. We disagree on many things (she opposes the social safety net and adores Dick Cheney). But we're both patriotic and we're both women, so I love her MSNBC show, Deadline: White House. She calls 'em as she see 'em, and it's good for me to hear the conservative point of view explained sanely and plainly, without the MAGA misogyny and racism. Also, we like the same movies and TV, so I could see us Netflix bingeing together. In between shows  I'd tell her I enjoyed her novel but I'm worried about her divorce. She could help me decide which home improvement project to do next.

4. Do you have tattoos?  What are they and why? No tattoos.

5. A book you love, and one you didn’t. One book? No, I'll give you series! I loved Sue Grafton's alphabet series and miss my fictional BFF, Kinsey Milhone. I don't like the Stephanie Plum series. I quit reading One for the Money early on when the heroine was handcuffed naked to the shower rod. Simply not amusing to me. BTW, I know how popular the books are, so maybe I'm just tight-assed and humorless.

6. A fruit you dislike, and why. Tomatoes. Their consistency creeps me out. That thin skin, those runny innards. EW!

7. Two words/phrases that make you laugh. I don't really get this question. But my oldest friend uses a catchphrase whenever she says something really absurd: "Just putting it out there." That can make me laugh. 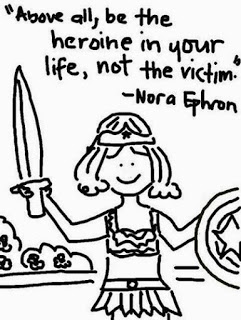 9. Something you miss. I miss my favorite uncle a lot. He was gone before he died because Parkinson's took such a cruel toll on him. But before he became ill he was so funny, so imaginative. Whip smart, too. I believed he brought magic with him when he entered a room. I would love to talk with the whole version of him now, ask him questions and get his advice. I also can't ever recall telling him I love him. I would do that in a heartbeat now if I could.

10. Three weird traits you have:

a) I think I love my time in the shower too much. I know I shouldn't spend so much time in there (wasting water and all) but it makes me happy.

b) I am lazy and messy about my surroundings but I kinda freak out if my towels -- kitchen or bathroom -- don't match.

c) I'm confused by people who talk about their faith all the time. I have always believed in and spoken to God. I try to live a life that would please Him. But my faith is private between me and Him and, I suspect, not especially interesting to anyone but Us.

11. What you wore today. Jeans and a t-shirt. It's what I'll wear tomorrow, too.

12. Word/phrase you use constantly "The thing of it is"

13. One thing you’re excited for Cubs/Pirates. First pitch is at 1:20 PM Sunday! My guys have won five in a row!

14. Your feelings on ageism Now that I'm old I don't like it.

15. Three interesting facts about yourself:

a) I won a Clio Award. It was back when Reagan was President, so I don't talk about it much because I'm afraid it ages me -- see question above. But it is a big deal.

b) I've done very well for myself professionally, considering I only earned three credits before dropping out of community college.

c) In my entire life, I've never not shared my home with at least one cat. When I lived with my parents there was Jingles (but I only know her from my baby pictures), Tommy, Little Tommy, Snoozer and Trouble. When I moved out on my own, there was Annie, Arthur, Wilma, Alison, Tara, Billy, Joey, Charlotte, and now Reynaldo and Connie.