She was a good girl. Oh yes, she was! 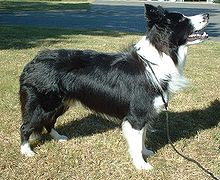 Gumbo, that is. My best friend's dog. She died last week when they were on vacation.

It was her time. She was 15, old for a border collie. She'd been suffering mightily with allergies and arthritis for the last three years. And she went peacefully. Since they discovered she didn't do well in kennels, when they had to leave her she stayed with friends. Shortly after they left, Gumbo stopped eating and her good-hearted caretakers took her to a vet, who advised it was hopeless, and their most humane choices were to either put her down then or to keep her on fluids until her people returned home to say goodbye. Wisely, my friend chose the former. It was easier on both Gumbo and his daughters that way.

And how Gumbo loved those girls! She preceded the oldest by a little more than a year and consequently was very, very possessive of them. She wore out the grass along the fence surrounding their backyard, where she ran circles, "guarding the perimeter" while they played. She whined about not being allowed to join her girls -- at least not until the freshly refinished floors could withstand the clicking of her claws. She was so forlorn that they fastened socks to her paws so she could slip and slide her way alongside them.

Even though he has always insisted that he "doesn't love animals" the way I do, he seems pretty freaking forlorn himself. He told me about Gumbo's harrowing battle with distemper as a very young pup, newly adopted from a shelter, and asked me how long it would be until he remembers not to look for her when he enters a room.

That's the greatest honor that can be bestowed upon Gumbo -- acknowledging the huge hole she leaves in their lives.
Posted by The Gal Herself at 6/21/2011 01:19:00 PM 4 comments: