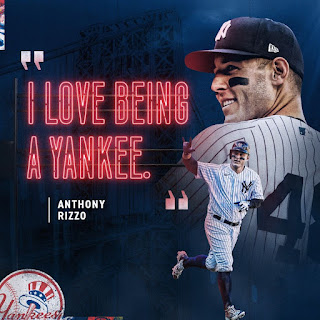 He re-signed pretty quick, which makes me happy because it means he got what he wanted and free agency stresses me out.

There were rumors about the Astros and the Padres, and he might have gotten more money with those teams. But I didn't see him going to Houston or San Diego.

His charitable efforts reach an exponentially bigger audience in New York. He does events with pediatric cancer patients at the FAO Schwarz flagship store in Rockefeller Center and media stars like Andy Cohen and Stephen Colbert helped publicize his auction. Of course since he was here for a decade, we Cub fans continue to support him and he still visits Chicago's Lurie Children's Hospital. So he has a base in two of America's three biggest cities. Houston and San Diego can't give him that kind of reach. He's a major market guy.

As the Foundation tweeted: "We are excited to be in New York and to continue to grow and help as many families as we can."

Anthony Rizzo walks it like he talks it. He deserves only good things. Here's hoping he gets a second ring in 2023!

PS I wonder what he would have said if the Angels had come calling.