Such a sad story 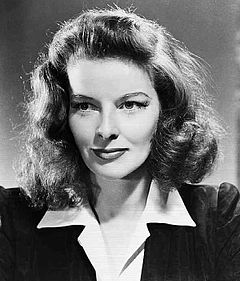 I admit it, I'm obsessing. About something I can do less than nothing about. I think I'm doing this to distract myself from worrying about my mother, but I am not the point of the post.

Instead, the redoubtable Katharine Hepburn is.

I discovered her when I was in high school and have worshiped her ever since: Beautiful, talented, independent and completely original. What's not to admire?

Not only do I consider her awesome, so have generations of movie fans. She has four Best Actress Oscars (to Meryl's puny little two, thankyouverymuch). Cate Blanchette won an Oscar for portraying The Great Kate and her affair with Howard Hughes in The Aviator. Her on and offscreen relationship with Spencer Tracy is the stuff of legend.

So why am I now sad when I think of this woman who lived a long (96 years!) and wonderfully productive life? Because it seems it wasn't a happy life.

In the 9 years since her death, all kinds of rumors have begun to surface about her. Mostly they circle her sexuality. Yeah, whatever. She never married*, never had children, so she had to be lesbian. How cliche! Besides, it doesn't explain why she carried on an illicit and mostly secret affair with the married Spencer Tracy for decades.Why not just marry elaborately and publicly, the way Rock Hudson did? Sorry, I ain't buying.

But the tales that somehow do ring true to me involve young Tom Hepburn. Those of us familiar with Kate's saga know how she was devastated by the death of her favorite brother, Tom, when he was 15 and she was 13. He hung himself -- according to legend, he was imitating a magician the family had just seen while visiting friends in Greenwich Village. Our heroine was the one who found him, with a sheet tied to a ceiling beam and knotted around his neck. This so traumatized her that she began giving his birthdate as her own (it wasn't until the end of her life that she admitted she was really born in May, not November) as a way to help keep his memory alive. This is the version of events she even told herself in interviews and in her autobiography.

Now it turns out some of her very closest friends, including director George Cukor, heard a different story about Tom's "accidental" death. The family "golden boy" wasn't golden at all. He stuttered, and was physically awkward and painfully shy when away from the clannish Hepburns. Instead of Kate hero-worshiping Tom, it seems he idolized his athletic, pretty and confident kid sister. He seduced her, and they began a short but completely consensual sexual relationship. When their parents found out, they blamed Tom because he was older and better able to understand the ramifications of their actions. Their son responded by committing suicide.

As the new tale goes, this was the transformative incident in her life. It left her more sensitive and introspective, but self-protective and wracked with guilt. Unable to allow herself the intimacy and joy of a family of her own. Decades later, as a very old woman, she asked a New York cab driver to take her to the Greenwich Village home where Tom took his life. She dissolved in tears at the very sight of the building, was unable to get out of the car or even speak for a time. Cukor believed she never recovered from losing Tom, never stopped missing Tom, and said he hoped that beautiful boy would greet her in Heaven, welcoming her at last to to peace.

If this is true, it's one of the saddest life stories I have ever heard. And while I don't want to believe it, somehow I do.

Oh, my poor Kate! I hope you are now resting in peace. 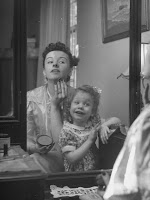 My mom is in the hospital ... again. This time, instead of the pneumonia or COPD that have plagued her in the past, it's some kind of infection. Maybe ileum, maybe kidneys.

She exasperates me, but she's my mom and I love her. So I'm scared.

I realize that she's ultimately in God's hands, and that in this realm she's being treated by a doctor she likes and really trusts, and all that is good. I'm trying to just get on with my Saturday. I talked to her on the phone and learned that while she's lucid, she's sleep deprived and in a lot of pain and the best thing I can do for her now is to let her be. Maybe I'll go visit her tomorrow.

1. When was the last time that you went out dancing? Ages ago. I don't even remember.

2. Have you ever had an argument with a teacher? Regularly. I had what was known as "a smart mouth."

3. Do you have a tough time remembering people’s names? Names? No. Anything numerical though stymies me. I can't even remember my own cell phone number.

4. Would you rather change your past or know your future? Change the past, I suppose. The allure of the path not taken.

5. What’s one thing you feel you must do in your life before it ends? Nothing springs to mind. I guess I just don't approach life in that way.

6. How many credit cards do you have right now that have a zero balance? Eight. Fortunately I had Quicken open on my desktop or this would have gone unanswered. 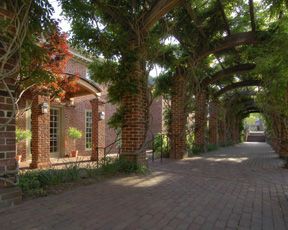 7. What is the most expensive thing you purchased this year? My upcoming vacation (next week!) is partially paid for. When the final bill comes, it will give me pause. I prefer to concentrate on the rewards I'm earning from the credit card company. Don't annoy me by telling me that's illogical.

9. If you could ask the president of the United States one question, what would it be? ONLY ONE QUESTION? This hurts! I guess I'd say, "You don't really think we'll ever be able to banish the Taliban from Afghanistan forever, do you?"