I can't believe we're still having this conversation

Six years ago, Laquan McDonald was shot by a cop. There was video. Chicago was repulsed. It was the first time I heard the phrase, BLACK LIVES MATTER.

I have never understood why that phrase offends anyone. If I were to say, "Save the manatees!" would anyone complain that I'm not interested in helping the polar bears?

If I were to shout, "Protect the unborn!" would anyone ask why I'm not interested in eradicating pediatric cancer?

If you're offended by BLACK LIVES MATTER, well, it says more about you than it does the justice movement. As President Kennedy said, "Those who make peaceful revolution impossible will make violent revolution inevitable." Maybe if we'd all listened to Colin Kaepernick instead of watching the Power Elite deny him his livelihood, our country would look different today.

Because there are still people who don't get it, I'm reposting this little girl. I hope her image goes far and wide. Maybe having an adorable messenger will help get the message across in a less threatening way. (Look! She's even wearing pink!) 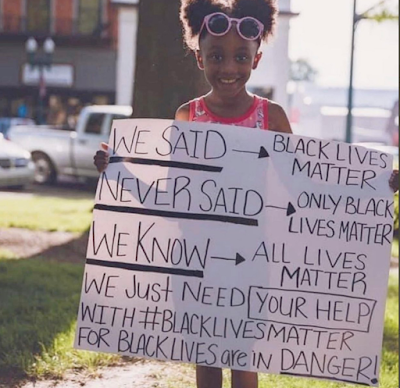 If you're still offended, it's because you want to be. And, I say this with all sincerity, I feel sorry for you. It must be awful to be devoid of empathy.