1) Bette Midler sings that the bugle boy wakes up Company B every morning by playing reveille. What awakened you this morning (phone, alarm clock, sunrise, etc.)? Or did you wake up on your own? My cat Reynaldo was hungry and/or bored.

2) This single was produced by Bette's arranger/piano player, who went on to have a successful singing career of his own. Do you have a favorite Barry Manilow song? I basically loathe him. Except for the song "Even Now." I thought I was completely over someone and then his name came up in conversation and I realized I wasn't over him at all and knew I was acting like Barry Manilow in this song. That's the downside to romance: it can make you behave like a Barry Manilow song. (Great. Now I'm remembering him again. "I swear I think of you and God, I wish you knew ..." Damn you, Barry Manilow!)
3) Bette was named after Bette Davis. Her sisters, Susan and Judy, were named for Susan Hayward and Judy Garland. So now we know who Mother Midler's favorite actresses were. Who are yours? Katharine Hepburn, Barbra Streisand, Jennifer Aniston.

4) Bette has been married since 1984 to artist Martin von Haselberg. She was 39 years old, already a star, and had never married before. Yet within six weeks of meeting him, she was so sure Martin was "the one" that they tied the knot. Have you found that love takes time, or, like Bette, have you fallen in love quickly? It creeps up on me. Yes, I'm thinking of the guy from #2 again. Sigh.

5) When their daughter Sophie was growing up, it was Martin who taught her to cook. What was the last thing you prepared in your kitchen? Did you use the microwave, stovetop, convection oven, blender, coffee maker ...? I nuked a cup of tea in the microwave.
6) Bette says that listening and compromise have been the key to their happy marriage but adds, "Compromise is hardest of all." On what have you compromised recently? Ha! I was working with a new creative director on a project and he asked me to revise my work. I thought he was making it worse, but these things are subjective and I wanted to be a good sport and a team player, so I complied. Guess what. Our client immediately asked me to take out everything he added. I'll be intentionally obtuse and pretend I don't know the moral of the story.
7) Bette and Martin have a farmhouse in upstate New York. She enjoys feeding the chickens (whom she has jokingly named The Kardashians) and puttering in her garden. Do you have a green thumb? Yes. I had to bring my office plants home and they have, literally, taken over my den. They'd do even better if I could bring myself to cut them back more often.

8) In 1973, the year this song was popular, actor Neil Patrick-Harris was born. He's best known as Barney on How I Met Your Mother, which ran from 2005-2014. Were you a fan? I like it when I stumble on it, but I don't go out of my way to watch it. Mostly because I dislike one of the characters whom we're obviously supposed to adore. (Robin.) This is why I enjoy Friends so much. I like all six of those characters.

9) Random question -- How often do you put crackers in your soup: Always, often, seldom or never? Always. 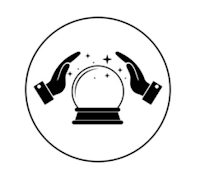 I don't claim to have any supernatural intuition. (That's Snarkypants' purview!) But I have a very strong feeling about Warren, and I can't shake it.

Warren is the big, colorful guy who -- until last February -- worked in our mail room. Everyone loved Warren. He shared, and overshared, with everyone who would listen. As he dropped off my Amazon packages, I learned that he:

• Hated living in Gary, and was saving to move to Chicago

•  Is terrified of bugs

•  His real name is Warren Edward, Jr., known in his family as WeeJay

... on and on and on. Sometimes I was charmed by him, sometimes I wanted him to shut up, but I always noticed him. I felt like I knew him.

In February he made big changes in his life. He went from our mailroom to "facilities coordinator" for a competitive agency. Instead of handling parcels, he was in charge of catering, making sure office supplies are on hand, etc. He also moved from Gary to Wrigleyville on the North Side of Chicago. Since he's in his mid-50s, these changes felt very scary to him. But he did it! Yea, Warren!

Then the pandemic hit. His new agency didn't really need him. When no one is working onsite, no one is having meetings that require catering. When no one is in the office, no one is ordering office supplies. Yet they have kept him on the payroll. 75% of salary, I believe he said. So he gets to stay in his new apartment. Yea!

So why am I worried? Because as I follow Warren on Facebook, I see him devolving. Spinning faster and further away from what he should be doing.

He's been going to the Wrigleyville bars all the time. All. The. Time. Even during the day. Even when the bars weren't technically open. If asked, he and his barmates would tell the police they were hanging out waiting for their food to go. No masks in any of the photos.

When the bars officially reopened this week, he bought a round because he always wanted to do that. "Like in the movies." Yeah, but Warren? You're not on full salary.

He's written about his new and pervasive battle with anxiety. He can't sleep. He can't relax. He posted about how disappointed he was with the offhand way his doctor handled his concerns. I responded I could recommend a good GP. "Not now," he IM'd me. "I'm in the bar." He never got back to me.

I've watched similar behavior with my friends Henry and John. Without jobs to anchor them, they drift and make less-than-stellar choices. Maybe it's a guy thing.

Anyway, as I watched Warren's latest video -- he's singing REM's "End of the World As We Know It" with his new best friend at a bus stop; 22º, no mask -- it hit me very hard that Warren is headed for something bad. Something sad. A crash of some sort. I hope I am wrong.

Warren is luckier than many during this pandemic. He is literally being paid to do nothing. He has friends who care about him. But he can't feel his blessings. I know his anxiety is very real to him. I just wish that he could see he has resources to address his pain and improve his life.

This is such a sad waste.