We can all change and become better 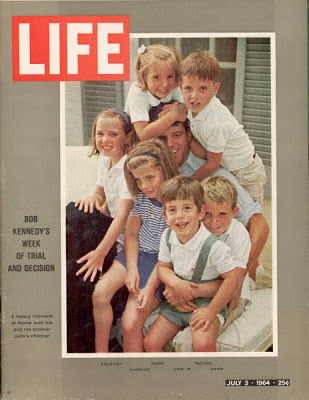 Bobby Kennedy died on 6/6/68. I was 10 years old. It completely rocked my world. There had already been so much real-life violence on TV that year, including Dr. King's assassination and the ensuing riots and nightly coverage of the Vietnam carnage. To my child's eyes, this man -- who always seemed to be surrounded by kids or dogs -- could help. Then he got shot, too.

He didn't die instantly. The bullet that shattered his brain didn't blow off part of his skull, as in the first Kennedy assassination. Bobby lingered overnight. I remember going to sleep hoping he would make it, not understanding how much damage a bullet lodged in the brain could do. Of course I know now that what made him HIM was already gone. But I was 10 and life seemed full of infinite possibilities. So it broke my heart to hear he died.

The more I learned about Bobby, the more he taught me about the human spirit. For there were really two Bobbys. In the late 1950s-early 1960s, he was pugnacious and (to use the term popular at the time) "ruthless." He lived in a black-and-white, us vs. them world. He prosecuted the Mob and clashed with Jimmy Hoffa because he believed they were BAD. The ends justified the means. He served his brother with energy and imagination and loyalty because JFK was GOOD. He did whatever it took to further his brother's agenda. No questions asked.

Then, in November 1963, he was shattered by his brother's murder. He emerged from grief a different man. The public outpouring of affection for his family transformed him. Expanded him. If you hurt, he heard you. Anti-war protesters, disenfranchised blacks, blue-collar whites, the poor ... you were his constituents. It's hard to believe now, but he was wildly popular with two demographics -- urban Northern youth and lower middle class Southern. No one has ever had such a diverse constituency since. It wasn't based on ideology, it sprang from belief in the man. After Bobby's death, many of his supporters went not to McCarthy or Humphrey or even Nixon but to George Wallace (!). I wonder what this nation could achieve if we had a leader who could unite those groups the way Bobby did.

As Ted Kennedy eulogized his brother, "He saw wrong and tried to right it. He saw suffering and tried to heal it. He saw war and tried to stop it." To Bobby, who still saw the world as black and white, it really was that simple. It's just that his heart grew to encompass everyone who needed him.

We can all change. We can all become better. We can all learn to love more and love better. That's what I learned from the man who died on this date.


6. Where is the place you dread the most? Wedding receptions. I'd rather go to a funeral than a wedding reception. After the funeral, when people are milling about and heading off for the buffet luncheon, you can just peel off and go home. With wedding receptions, you have to hang out. Fucking spare me.