1. In a relationship, have you ever hung in even when you knew for sure it was over? Yes. Partly because I was addicted to the drama, partly because EVERYONE had been telling me for so long that he was a dick and I was so used to defending him that it didn't occur to me I could leave.

2. If you had the ability to perpetually alleviate any pain on your body, what would it be? My gut

3. What place would you visit if money were no object? Chateau Elan, just outside of Atlanta. I haven't been to this luxury spa/vineyard in two years because i 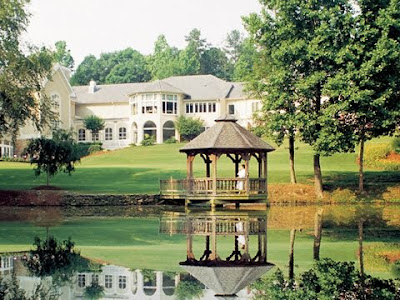 t's soooo expensive and Colonial Williamsburg has a very nice spa, costs less and has that added shopping/historical thing going. But sometimes I just yearn for the beauty and pampering of Chateau Elan. It's like being in a sensory deprivation tank, away from anything in the outside world that can stress you out.

4. What is one thing you would love to change about yourself? My impatience/lack of discipline

5. Do you think your parents were too strict growing up? My mom was probably too lenient, my dad was strict about the wrong things.

6. In general, how many old friends do you have that you talk to at least once a year? I don't know how to answer this because I'm wondering if you mean"talk" literally, or if birthday/holiday cards and Facebook count.

7. What was the last compliment you received? "You're the glue that holds this team together." I heard that Wednesday afternoon from a coworker who is a bit of a hardass, which made it mean all the more.

8. Have you ever told someone you loved them but didn't really mean it? Yes. But I thought it was OK because I wanted to love him ...

9. In your opinion, would it be harder to lose someone close to you more as a child or harder as an adult? Oh, I dunno! It's never easy.