Meme on the Fifth of July

1. Are you "proud to be an American?" Of course. I love my country.

2. Favorite Founding Father? Thomas Jefferson. I am in awe of his imagination and intelligence. As JFK (no slouch in the intellect department himself) said at a ceremony honoring 49 Nobel laureates: "This is the most extraordinary collection of knowledge that has been gathered at the White House at one time, with the possible exception of when Thomas Jefferson dined alone."

3. Favorite president? I find both JFK and Abraham Lincoln very inspiring and feel a real connection to their life stories. I especially like that the motherless boy who grew up in a log cabin and the heir to a fortune can both find their faces on our currency.


4. Biggest "Patriotic Moment?"11/04/08 in Grant Park, watching Obama's acceptance speech in person. It was my city and my country at its best.

5. Favorite patriotic song? America the Beautiful. Especially that third verse. "Oh, beautiful for heroes proved in liberating strife. Who more than self their country loved, and mercy than more than life." My throat gets tight whenever I think of it that way.

7. Happiest political moment of your life? Shit, I already used the Obama election in #4. OK, how about this -- Bill Clinton's 1992 election. It was the first successful election I'd ever worked on and it felt so right. I felt that we (my friends and I) finally had a President who understood us, after 12 years of (in the words of Don Henley) the "tired old men that we elected king."

9. America's gift to the world? The civilized transition of power

10. Favorite Bill of Rights right? I'm a big First Amendment girl. Freedom of speech, assembly, the press and religion are all very important to me. Especially after Rick Santorum rather amazingly, and distressingly, said that JFK's landmark speech on faith and the Presidency makes him "throw up." That anyone voted for Santorum after that makes me worry about how fragile these freedoms just may be today. 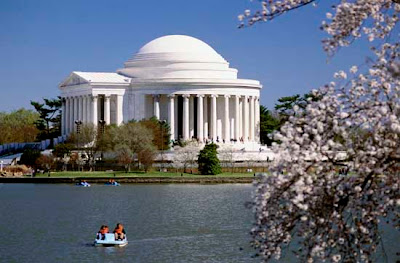 12. Favorite D.C. monument? The Lincoln Memorial for my man Abe. But, in terms of placement and architecture, the Jefferson Memorial.

13. Your dream for America's future? That, to borrow from Obama, we remember that what unites us is greater than what divides us. It's past time to turn down the heat on the rhetoric, folks.
Posted by The Gal Herself at 7/05/2012 03:00:00 PM 2 comments: