My friends, Henry and Reg, celebrated their 26th anniversary by going to the Key West Courthouse and taking out a marriage license. They wanted it dated May 11, because it was on May 11, 1991, that Henry and his cat Saatchi moved into a house with Reg and his cat Koko. They've been together ever since.

On Monday, they went back to the courthouse and were married.

Their attitudes toward the ceremony were very different. For Henry, it was his wedding day. He insisted they get hair cuts and wear ties for the occasion. He was inspired to write a poem and couldn't stop thinking about/talking about the upcoming event.

For Reg, it was an annoyance. He wanted to get married, but not like this. His parents live in Maine and, since hip surgery, his father has trouble traveling. Reg wanted to wait until his parents could come down to Key West. But, in the age of Trump, Pence and Gorsuch, he was no longer confident that marrying would forever be his civil right and so he acquiesced to city hall. But he resented the trappings. 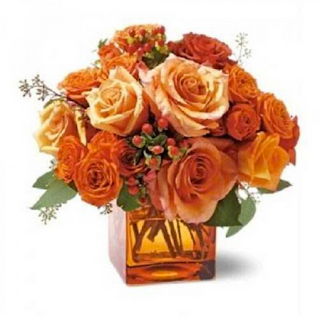 Because I'm closer to Henry, I made as big a fuss as I could. I called a local Key West florist and asked her to deliver a vase of peach and orange roses. I sat by the phone so I could "ooh" and "ahhh" after -- in Henry's words -- "the deed was done."

But in a way, I'm more like Reg. For these two didn't need a license or a ceremony to be married. They have been through so much together -- most notably Reg's hospitalization/health problems and Henry's major career setback and breakdown. They are so supportive of one another, so respectful of one another. They simply have to be an example of what God wants each of us to find. 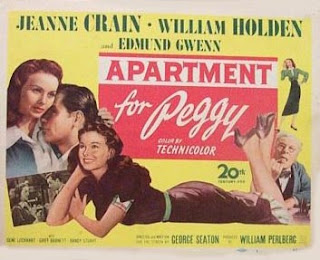 Last night my movie group saw a mostly forgotten film from 1948 called Apartment for Peggy. It's a comedy-drama about postwar newlyweds, living on campus when he goes to college on the GI Bill. And I was totally into it.

Yes, William Holden was positively dreamy in 1948. But his was not the character who captured my imagination.

It was Edmund Gwenn as a retired philosophy professor who burrowed into my heart. His wife is dead. His son died in WWI. The college strongly suggested that it was time to retire. So he's rattling around in his big house, filled with ennui as he writes his "opus." (We're never told exactly what it is.) When the book is done, he calmly decides he's going to commit suicide.

He loved his wife and son, but they're gone. He traveled every year when he was a husband and father and saw much of the beauty the world has to offer. He loved teaching, but the college no longer wants him. When his book is done, he'll be done, too. It will have been a good life, ending on a high note. Why wait until he is sick and scared to go? Why not check out in his own way, on his own terms, as winter turns to spring?

His plans are upended when he meets the Peggy of the title. She's an exuberant 19-year-old bride, pregnant with her first baby, and she and her Navy vet husband have nowhere to live.  Literally nowhere. They are so desperate that they accept the tiny attic in the professor's home. He doesn't want them there, of course. But as long as he's still living on campus, the college can prevail upon him to take them in.

He gets involved with Peggy and her handsome hubby, and their dog and cat, and their preparations for their new baby and he experiences a renewed will to live and enjoy life.

Sound predictable? I suppose it was. But I was totally into it emotionally.

Because just as the lights went down, I learned that Pervy Walt died. Last summer, my 90-year-old neighbor was diagnosed with cancer. This year, over the last 5 months, he went to the hospital three times -- twice in an ambulance -- before this fourth and final hospitalization.

I'm glad he died in the hospital, hopefully with a lot of pain meds and a minister or nun nearby. I'd be lying if I said I'll miss him -- his behavior had gotten too creepy and inappropriate for that. But I wonder if he was like the professor at the beginning of the movie. I wonder if he was ready to go.

And I'm grateful to God and fate and my movie group and Hollywood for giving me Apartment for Peggy to help me work through my feelings.