What made up my day?

One hour spent with my personal trainer

30 minutes getting a massage in the club's spa

Hot dog, fries and a bag of M&Ms to celebrate how fabulous I feel. (It won't kill me once in a while.)

Cub game and a nap

Now off to do two (or maybe three) loads of laundry

I should have done housework. This place is overrun by paper and that shower curtain liner isn't going to get less icky with time. Oh, well ...
Posted by The Gal Herself at 5/17/2009 06:57:00 PM 1 comment: Links to this post

He always makes me smile 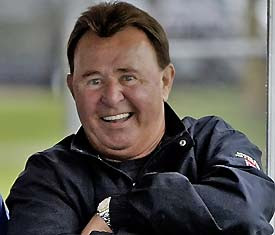 Ron Santo just "sang the stretch," as we like to say at Wrigley Field. While his rendition of "Take Me Out to the Ballgame" is not the most tuneless one of the young season (Denise Richards will undoubtedly retain that dubious honor all year long), it was gravelly and off key. And completely delightful.

Ronnie, This Old Cub, is the face and spirit of the Chicago Cubs. A great third baseman (more than 300 homers and 5 Gold Gloves for fielding excellence), he's been very open with his struggles with diabetes (it's cost him both of his legs) and has raised tens of millions of dollars for Juvenile Diabetes Research Foundation. Currently he's the engaging, corny, and passionate half of WGN radio's broadcast team.

1. What bill do you hate paying the most? My monthly contribution to my personal IRA. Technically it's an investment, not a bill. But these days it fills me with anxiety. Since I'm investing for the long-term, I'm trying to take advantage of Dollar Cost Averaging. But what if I'm wrong? That's the thing of it -- no one really knows what's going on with our economy.

2. Where was the last place you had a romantic dinner? The Cityscape Bar. It has floor-to-ceiling windows and offered beautiful views of the city everywhere we looked.

3. How many colleges did you attend? Just one. And I attended it fitfully, at best.

4. Why did you choose the shirt that you have on right now? I'm wearing a nightshirt right now. If that counts, it was carefully chosen because it landed on top of the other nightshirts in my pajama drawer.

5. First thought when the alarm went off this morning? Sigh. It was a random sweet, sexy thought.

7. What do you miss being a child? My grandpa. He had a big influence on me, and when I recall how loving he was, I wish he was here to tell me how he feels about how I turned out. (Also, if I was a child again, my mother would be young and healthy again.)

8. What errand/chore do you despise? It's not a regularly-scheduled chore, but I know it's time to switch out the shower curtain liner and doing that is such a drag ...

9. Have you found real love yet? Yes. Unfortunately it didn't work out.

10. What do you get every time you go into Wal-Mart? I never shop at Wal-Mart. There are too many kids there. Not that I don't like children, but when they're running about unattended, it makes my nuts! Aren't their parents worried that they could trip and get hurt, or break something, or worse, end up abducted? It genuinely upsets me. My best friend says I must be border collie because I have an overwhelming desire to round them up and keep them safe.

11. Do you think marriage is an outdated ritual? To be completely honest, I don't know.

12. What famous person would you like to have dinner with? My answer to this question changes. Right now, the answer is Elizabeth Edwards. I have much to tell her and much to ask her.

13. Ever had to use a fire extinguisher for its intended purpose? No. But this question intrigues me. What other purpose would it be used for? A former lover was amused by the my insistence on double birth control (I was in the Pill and I insisted he wear a condom, too) and teased me by bringing my fire extinguisher into the bedroom, asking me if I wanted to add pressurized nitrogen and chemical foam to the mix.

14. Somewhere in California you've never been and would like to go? I've been to LA, San Diego, San Francisco ... can't think of anywhere else I'd like to visit. Californians, am I missing something great?

16. Do you have a “go to” person? Yes, but it's a different person for different crises.

17. Are you where you want to be in life? Sometimes. Depends on when you ask me. Right now? Yeah, sure.

18. Over the years, what about you do you think has changed the most? My waist. It's gone from well-defined to MIA.

19. Looking back at high school were they the best years of your life? No. NO! For the love of God, NOOOOOO!

20. Are there times you still feel like a kid? Yes.

21. Where was the hang out spot when you were a teenager? The Mall!

22. Who do you think impacted your life the most? I suppose my father, though the impact wasn't good in every way. (BTW, he would be observing his 76th birthday this month. I say "observing" because my poor dad wasn't much in to celebrating anything.) For the post dedicated to my dad, click here.

23. Was there a teacher or authority figure that stood out for you? My third-grade teacher, Mrs. Kessel. I loved her.

24. Do you tell stories that start with “when I was your age”? Yes.

25. What is the scariest thing that has happened to you as an adult? Last September, I almost got creamed by a cab.

26. What advice would you give to someone about to get married? Ask someone else for advice. I am certainly not a credible authority in this area.

27. What advice would you give someone starting their first job? Even the biggest city is really "a small world" when it comes to work, and behave as though you'll see all these coworkers again someday.

28. If you could go back and change one thing you did, what would it be? I said something very cruel to someone, and I dearly wish I could take it back.

29. If you could go back and change one thing someone else did, what would it be? I wish my friend Kathleen wouldn't have switched jobs when she did. We worked at the same agency -- she got me this job -- and she was my best friend's boss. If she had remained a year or two more, he never would have been let go. I miss him terribly, and that lay off was a massive blow to his ego. (Of course, she would have someone else go instead, which would have been a blow to that person's ego ...)
Posted by The Gal Herself at 5/17/2009 01:49:00 AM 8 comments: Links to this post