This weekend's challenge: Retell your favorite book in 33 words.

With all due respect to the marvelous William Goldman:

S. Morgenstern writes of a humble farm boy who becomes a famous, yet dread, pirate. But in reality, he’s a hero who lives for justice, camaraderie, adventure, and his one true love, Buttercup.

A Word about Victims

This is why I am disturbed when people are so quick to hang the victim mantle on those who had power and used it to abuse others. 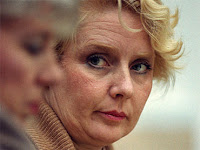 Betty Broderick maintains she was driven by abuse to enter her ex-husband's house, using keys removed from their daughter's purse without that poor girl's permission or knowledge, creep up the dark stairs and, pre-dawn, pump 5 bullets into their sleeping bodies. Yeah, they were asking for it. By sleeping in their own bed miles away from her. Betty was driven all right, in a car paid for by the ex-husband she shot. She is a murderer. An abused woman wants to avoid her tormentor. Betty was an angry and abandoned woman on a stalking mission. Yet I keep getting messages from women who tell me I am a bitch and Betty is a victim. Yeah, right. Ladies, if a man dumps you for a prettier and younger woman, it's sad and unfair but the wise course of action is to move on. It is NOT wise to buy a gun, practice shooting him and his new wife at the firing range, and then in an act of rage and supreme selfishness leave your children with a legacy of infamy -- but no parents.

Joe Paterno knew that something untoward was going on in his Penn State locker room and yet did little to stop it. Joe Pa was a god on that campus. He had power to have the situation investigated, if not stopped. He didn't do it. Yet I have received comments telling me that Paterno is a victim. No, he was an enabler. The boys who were sodomized were the victims. Gentlemen, if you don't want people to be contemptuous of you because you looked the other way when child abuse occurs, then don't look the other way. Man up and protect those who don't have power and need your help.

Oh, and while I'm it, I have some words of advice for "volunteer community watch commanders." You are not policemen. You are not protecting your neighbors when you carry that concealed gun on your rounds, you are trying to enhance your own perhaps fragile sense of your manhood. If the police tell you stay in their car and let them handle it, stay in your car and let them handle it. If you do not heed this warning and shoot an unarmed kid dead, then that dead kid is the victim, you are not.

And, since I'm feeling very wise, I advise you to explain to your wife that lying under oath is a crime, and if she gets busted, she won't be a victim, either.

Sometimes the world confuses me.